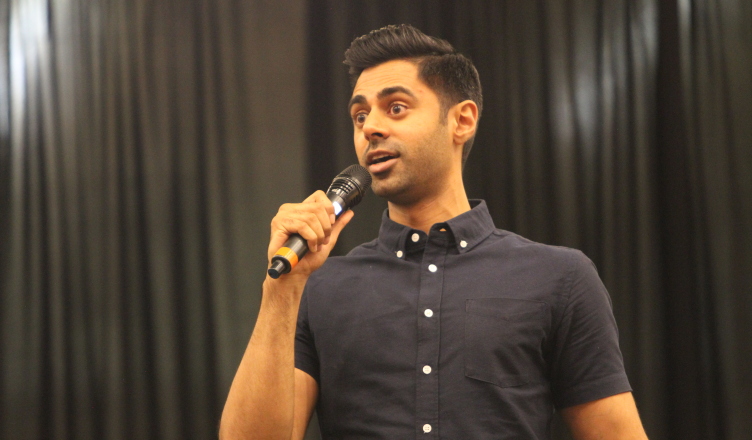 Comedian and “The Daily Show” correspondent Hasan Minhaj wielded humor and statistics as he tackled racism, Islamophobia and other topics in American politics at SECU Arena on Sept. 19.

As this semester’s Division of Student Affairs Fall Diversity Speaker, Minhaj talked about the myths and misconceptions about Muslims, and the miniscule statistical probability of being killed by a terrorist.

According to the Migration Policy Institute, the United States resettled 784,000 refugees between 2001 and 2015. During that time, only three refugees were arrested for planning terrorist activities.

“There are literally more Golden Girls than refugees affiliated with terrorism,” Minhaj said.

Minhaj drew a parallel between people thinking he is a terrorist just because he is Muslim, and a man who brought a Samsung Galaxy Note 7 aboard a plane Minhaj was on.

“I’m not saying all Samsungs blow up,” he said. “I’m just saying every phone that blows up is a Samsung… This is an Apple country. I’m just trying to make this plane great again.”

Minhaj addressed the double standard that is applied between black or brown people, and white people who commit acts of terror.

Minhaj noted that the U.S. is a nation of immigrants, and that the ancestors of almost everyone in this country came from somewhere else.

He closed his show by commenting on a photo of refugees climbing out of water after their raft washed ashore.

“These people are fleeing persecution themselves,” he said. “They’re fleeing terrorism. If they’re willing to wait in line for two years, we owe it to them to look over their applications. Because at some point someone looked over ours.”

Minhaj said that in his comedy, he focuses on his personal perspective as a Muslim man, but he emphasized the need for more platforms for a diverse range of voices.

Instead of trying to tell the story of a Muslim woman or a queer Muslim, Minhaj said he wants to “be the supporting character in your experience.”

Senior political science major Alveeraa Rizwan said that, as an immigrant herself, she enjoys the relatability of Minhaj’s comedy.

“I think especially for me, having been born in a different country, all of the immigrant stuff that he talks about is really relatable,” Rizwan said. “So I just think the fact that I can relate to him on a personal level is really good about his comedy. Because you can laugh with it but at the same time you’re like ‘yep, my parents would kick my ass.’”

After missing Minhaj’s show in D.C., Towson alum Ahson Rehman said he had to come see the comedian speak at TU.

Minhaj’s parents immigrated from India; Rehman is a Pakistani-American. But as a Muslim, Rehman said he was able to relate to a lot of Minhaj’s comedy.

“It really hit home in terms of a lot of the comedy he had,” said Rehman, who was a biology and art major when he attended Towson. “And it really had a meaning to it. It wasn’t just simply something comedic, but he had a purpose to it. He had a goal to sort of break stereotypes and that’s what I love.”

During Minhaj’s speech on Tuesday, he talked about feeling the pressure of having to be a model minority as a Muslim.

Rehman found that he, too, wrestled with that issue.

“Recently I had a conversation with a friend of mine and culturally we were always sort of careful in things that we did, just to make sure everyone approved of it within the community,” he said.

Rehman recounted a story in Minhaj’s set in which Minhaj was going to his fiancée’s house to get married when his father stopped him and asked “What will people say?” Minhaj responded to the effect of “I don’t care what anyone else thinks.”

That response hit home for Rehman.

“To be honest, I sort of live that every day now where I’m like ‘I don’t care what other people think. As long as I’m doing what’s right, I don’t have a problem with it,’” he said.

The Towerlight sat down with Minhaj after the show for a Q&A about his comedy, journalism and his experiences as a Muslim American.