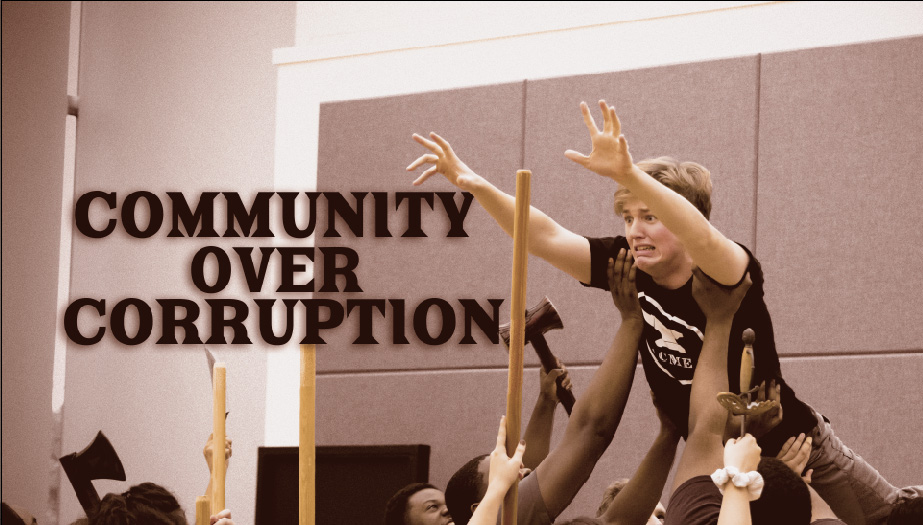 In wake of both the #MeToo and #TimesUp movements, Towson University’s latest production, “Fuente Ovejuna,” aims to cast a light on corruption and power imbalances, two topics that weigh heavily within these movements.

Written during the Spanish Golden Age by the infamous Spanish playwright Lope de Vega, this play tells the story of an incident that reportedly happened in the village of Fuente Ovejuna in 1476.

According to Director and Towson University Professor Robyn Quick, the village was under the command of Fernán Gómez,  a military officer who committed numerous crimes against the people of the village.

“He stole their lands,” Quick said. “And according to the translation of the Spanish history that I read, ‘took by force their wives and their daughters.’ So the commander committed these egregious acts against the villagers. One day in April 1476, the historic record tells us that the villagers rose up against him.”

Though there are many records that contain information regarding the commanders, Queen Isabella and King Ferdinand, and about the incident from the governing party’s point of view, the records do not explore what the villagers were subject to at this time. De Vega is the only one to tell the story from the villagers point of view. He explores how these events shaped theirs lives, how these events lead to their uprising against their commander and how these people were treated post-uprising.

Quick shared how her studies from her time in graduate school made power imbalances all the more apparent to her.

“We had to study a list of 100 plays that we were given,” Quicks said. “Out of those 100 plays, two were written by women. My friend Mary and I secretly called it the senatorial list, because at the time, there were two women in the U.S. senate.”

Quick shared that this imbalance, as well as her own experience as a young woman, was very much on her mind as she studied for her exam, and remained in her thought process when deciding on “Fuente Ovejuna” for this year’s production.

The relevancy of this play stems from its unexpected balance of empowerment.

“I think there’s something also to be said about basic empowerment and trust in women’s voices in speaking out,” said Griffin DeLisle, a TU student playing the Commander, the antagonist of this play. “Especially with the given case of Anita Hill whom was an inspiration [for Robyn] for this play, but also with the Kavanaugh case that’s going on right now.”

DeLisle highlighted that this play speaks volumes in terms of calling out timely and relevant topics in the news today, especially surrounding gender inequality.

“Women are believed on a base level in this play,” DeLisle added.  “Any time they’d bring up an issue, it is believed by the community and brought to full attention. I think that is a really potent idea right now.”

Hill inspired Quick’s decision on directing this play, but more so by the frightening parallels Hill’s case draws with many cases occurring today.

“Right after I took my comps and read about “Fuente Ovejuna,” I saw on television some senate hearings, and there was a young African American woman in a suit testifying before the senate,” Quick said. “That’s not something you saw every day. It attracted my attention and I listened to her story, and I believed her story. As for the men in the room, it didn’t seem to impact them in the way it impacted me.”

Quick noted how Hill’s decision to speak up fed Quick’s own sense of empowerment, but how the amount of #MeToo stories within the past year have served as a haunting reminder that changes still need to be made.

“After Anita Hill’s testimony we had the year of the woman, and very soon we had more than two women in the senate,” Quick added. “As a young woman I was very bolstered by that and very strengthened and encouraged. And then in January 2018, of this year, it occurred to me in a very painful way that history wasn’t finished setting things right and it might be time to look to Lope de Vega again.”

Inspired by the power of De Vega’s words, the Department of Theatre Arts and Quick decided that “Fuente Ovejuna” would be most appropriate for this time and this audience.

One unique component of “Fuente Ovejuna” is its group protagonist, the people of the town. A common challenge amongst the cast was bearing the deep emotions and interconnectedness of their respective characters within the village.

“This play is the story of the villagers, and their experience under this commander,” Quick said. “In this play, they try absolutely everything they can to survive and thrive under this man. But his violence against the people, their bodies, their town, their honor, their sense of community, his transgressions are so absolute that they recognize that the only way to survive is to come together to protect each other and protect their village. These feelings of sadness, desperation, happiness, and anger, resonated so strongly past just being words within a script, and deep within each cast member.”

For some student actors in the show, the emotions of the production run deep.

“Something I have been dealing with is how much it hurts, because it hurts a lot, and it hurts hard,” said Isaiah Harvey, a student playing the role of Frondoso. “But then, there are moments of joy, and you really feel that joy. And sometimes they happen with in the same scene, so it’s an emotional roller coaster, to use that cliché. This show has been one of the most emotionally connected I’ve been to the story, and that in itself is a challenge.”

TU student Jake Schwartz, who plays Barrildo in the play, agreed in the moving powers of the show’s story.

“There are moments I am genuinely laughing along with the characters, and there is a very specific moment I can think of where I am crying on stage because something happened to someone I care about,” Schwartz said.

As a group protagonist, the deep rooted and genuine connections the cast have made with one another, and their own characters, became a driving force of authenticity and realism for this play. In a similar way, these feelings rung true for the antagonist, DeLisle.

“As playing the abuser in this situation, and I’d love to quote one of my colleagues who is not involved in the show, ‘these are roles that need to be played,’” DeLisle said. “As much it is their story as a community that needs to be heard, the evil in this world needs to be played authentically to give power and perspective to the ends and abuse that the community is brought to, and that’s rough. It’s hard taking that on, it’s part of our whole conversation.”

According to Quick, both her and the rest of the cast and crew are working to perform the production in an honest and accurate manor.

“I can hope that someone would be watching the production, but then realize they could almost be watching themselves, and that they have the power to stand up against whatever horrible thing is dragging them down, may it be a commander, or may it just be some stress in their life” said Schwartz.

Aryamar Colon-Pappaterra, who is playing Laurencia in the play, hopes that the audience members can truly connect emotionally to the story, and see what is capable when a community truly feels for and supports one another.

“When people have true empathy, when they stand together, and they aren’t worried whether something directly affects them, when they truly are a community, each other’s pain, each other’s burden, they carry it together,” Colon-Pappaterra said. “[They see] what [is] capable in the face of whatever tyranny or oppression, or whatever hate they are facing.”

“Fuente Ovejuna” is set begin showing on Oct. 18 at the Mainstage Theatre, located within the Center for the Arts. Tickets can be purchased online on Towson University’s box office website, or at the box office. Students can purchase tickets at a discounted amount of $8. Senior citizens, teachers and staff, alumni and TURFA members are also subject to discounts. Tickets sell for a regular price of $10. 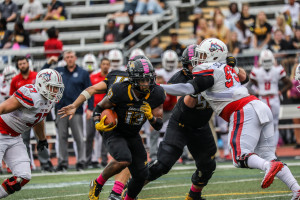