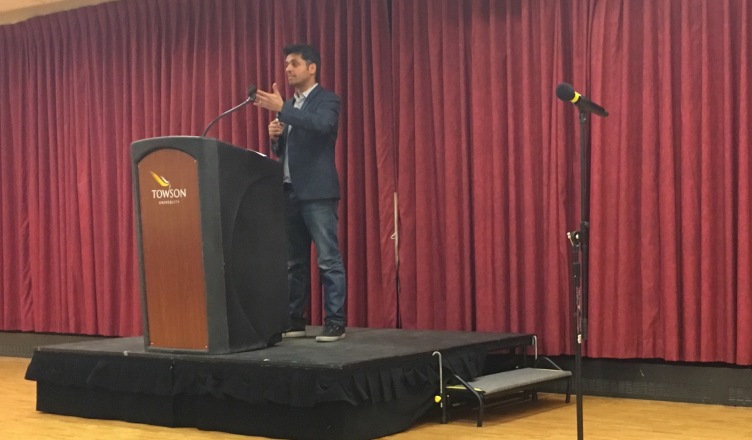 “The diverse stories of 1.7 billion Muslims and 1,400 years of rich, dynamic Islamic civilization have been reduced to a singular stereotypical image – rage boy,” Ali said.

Ali, who gave a presentation billed as “Understanding Islamophobia,” describes this “rage boy” trope as a “bearded, anti-American, bellicose, turban-wearing, brown skinned-guy who is always burning American flags, who is anti-semitic and angry.”

He cited “Iron Eagle,” “Aladdin” and “Back to the Future,” wherein a Libyan terrorist kills Doc Brown,  as stereotypical, harmful imaginings of Muslims that ought to be replaced by realistic narratives.

“I ask us to become participants, not spectators,” he said. “We are not impatient, we are not powerless – we are privileged. We have the opportunity to be proactive. The way to speak powerful truths is to do just that: speak. Pick up and unleash the pen…. We want to emerge as protagonists of the American narrative. In order to do that we have to tell stories that are by us – for everyone. No longer by us for us.”

Ali told the audience that he was born and raised in California, and that he went to preschool knowing only three words of English but went on to graduate with a degree in English from the University of California, Berkeley. He compared being Muslim at school to being one of the popular kids.

“Everyone’s giving you lavish attention – even the people you want to avoid,” he said.

There have been many people in the western mainstream press who have also been writing the stories of Muslims and creating negative stereotypes, Ali said. What people know about Muslims is overwhelmingly negative due to the sensationalized stories shown in the news media.

He said that an influx of Muslims came to America in the 1500s and that up to 15-30 percent of slaves in the slave trade were Muslim.

“If you think about it, Muslim blood, Muslim sweat and Muslim stories have fertilized this country’s soil from the beginning,” Ali said.

There has been a spike in employment discrimination against those with “Muslim-y,” or stereotypically Muslim-sounding, last names and an increase in bullying of Muslim children in schools, he said.

Senior Sarah Kirksey said she thought Ali’s speech was interesting and that she didn’t expect as much humor as there was.

“He made a lot of good points…. I’m happy that there was a lot of people here. It’s interesting to hear it from a Muslim’s perspective and for him to just come up and be so comical about the whole thing,” Kirksey said.