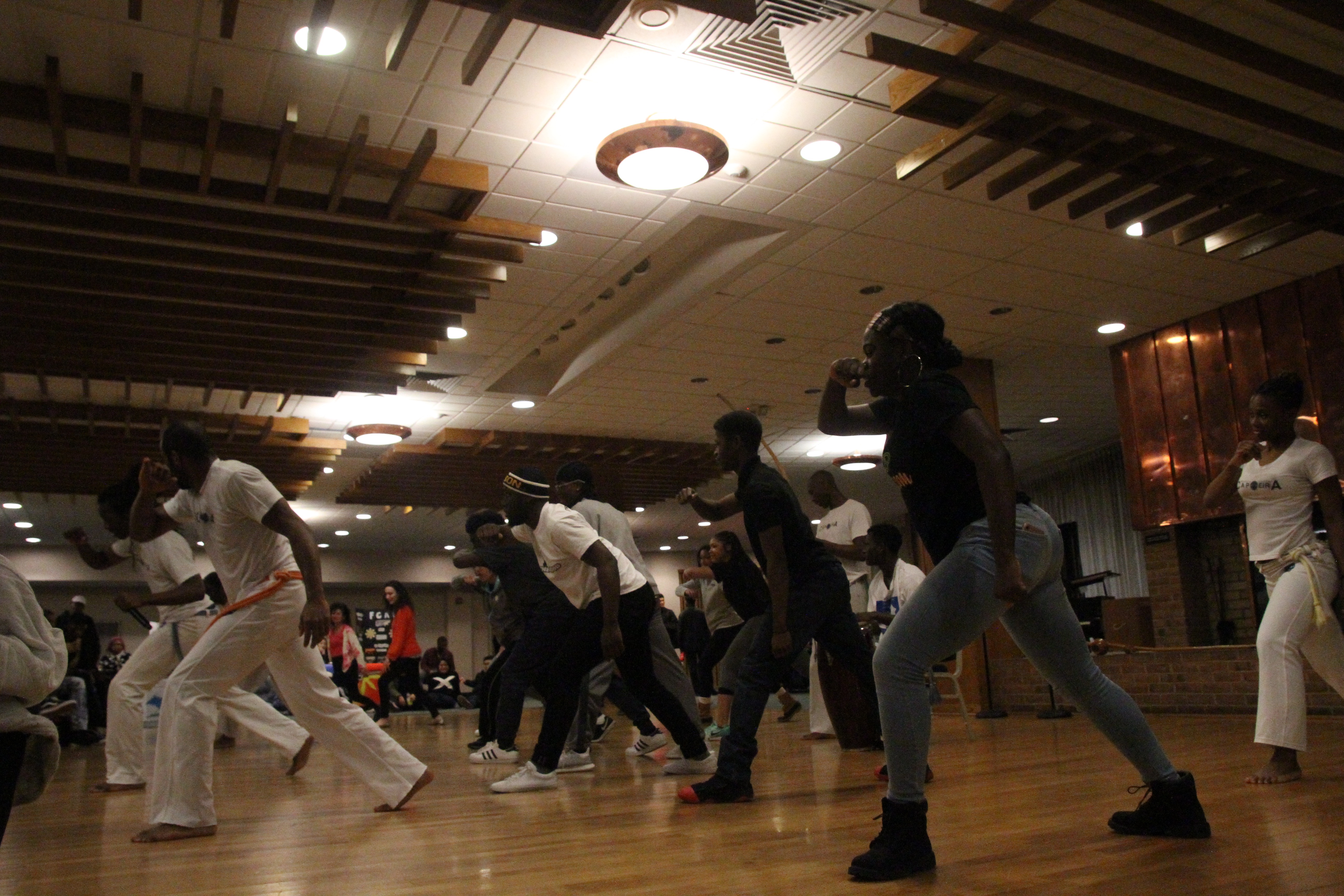 CultureCon gave Towson University community members a journey around the world all within the University Union Potomac Lounge on April 9.

S-nemeh Barnes, a junior majoring in information technology, was among the capoeira performers.

Barnes said his mother took him to a capoeira class when he was seven years old, and he’s been practicing the martial art ever since.

Barnes is currently in the process of starting a capoeira club at Towson. Although he said the club probably won’t officially launch until next semester, he hopes to attract a “ragtag team of capoeiristas” in the meantime.

“I’m from the D.C. area and, while here, I don’t have any capoeira to do,” Barnes said. “What better way to for someone with as much capoeira experience as I have to do capoeira than to teach other people, so we can all do it together?”

Barnes said people interested in getting involved with capoeira can contact him or Foreign Languages Department Chair Lea Ramsdell, who will be sponsoring the club.

Barnes also demonstrated the berimbau, a Brazilian instrument that consists of a wooden bow (verga), a steel wire (arame) and a hollowed gourd (cabaça). The musician plays the instrument with a stick (baqueta) to produce sound, a small stone or coin (dobrão) pressed against the wire to change the tone, and an optional rattle (caxixi) to accompany the berimbau’s music.

“Our beats go hard and our moves are so precise,” the team members chanted. “We stomp, we clap, we yell. Other steppers don’t suffice.”

When the time came for audience volunteers to participate in the capoeira demonstration, Alabi’s Rhythm teammates pushed her onto the stage.

Alabi said she had fun trying capoeira for the first time and that she might even return for round two sometime.

“You don’t really even have to have much rhythm,” she said. “You just have to follow steps. And with the whole group around you, clapping – it was really encouraging.”

Junior Katie Benisch has been dancing with Pasión for three years now.

“I’ve been dancing all my life, but I actually just joined the club my freshman year because I wanted something to do,” she said. “The club is very welcoming and you don’t need experience to do it or anything.

“You can say we have 350 organizations, but what do they do?” she said. “It’s good to exhibit what they exactly do.”

Erin Frias, president of the Filipino Cultural Association at Towson, said she became involved with the club when she was a freshman to learn more about her own culture.

“When I first joined this club, it really taught me about my culture that I wasn’t really in touch with before,” said Frias, a speech pathology and audiology major. “It taught me my roots, and I just want to share that with the Towson community.”

Now a senior, Frias is happy that she’s been able to connect to her Filipino culture.

Attendees tried tinikling, a Filipino dance that involves two people tapping and sliding two bamboo poles on the ground, and a third person dancing over and between the poles.

Barnes said CultureCon showcases the importance of learning about cultures different than your own.