I’ve said it before and I’ll say it again; this year’s award shows are making leaps and bounds to fight for a better tomorrow. The 87th Annual Academy Awards held Sunday, Feb. 22 was no different. From “The Imitation Game” and “The Theory of Everything” to “Still Alice” and “Selma,” this year’s nominated pictures focused on the lives of those who faced injustice and prejudice and were able to overcome the obstacles and achieve something truly amazing.

To portray a character of such a large magnitude could not have been an easy task, and the talented actors who took home Oscars used the opportunity to shed light on their experiences. Eddie Redmayne, Oscar winner for Best Actor for his role in “The Theory of Everything,” dedicated his award to all those still suffering from Lou Gehrig’s disease (ALS) and said that it really belonged to the Hawking family. Patricia Arquette won for her role in “Boyhood” and used her acceptance speech as a platform to challenge and demand for equal pay for women said, “It’s our time to have wage equality once and for all and equal rights for women in the United States of America!” Apparently Arquette wasn’t the only one to have those thoughts and feelings because the audience immediately reacted by giving her a standing ovation complete with Meryl Streep fist-pumping and shouting, which I’m sure will become the biggest meme of 2015.

Actors weren’t the only ones to shed light on shadowed subjects, Graham Moore, Oscar winner for Best Adapted Screenplay for “The Imitation Game,” spoke about his personal connection to the movie. “I tried to commit suicide at 16… and now I’m standing here,” Moore said. He used his Oscar win as a platform for suicide prevention and depression awareness.

Arguably the most memorable part of the night was when John Legend and Common performed “Glory” from the movie “Selma” in honor of it being 50 years since Martin Luther King Jr. was killed. With the bridge in Selma as their backdrop and dozens of people marching forward during the performance, the audience was teary-eyed and on their feet for the performance and once again when Legend and Common won the Oscar for Best Original Song. The duo’s acceptance speech was more focused on calling out for a change than thanking family and friends.

We’re at a time where actors, musicians, directors and writers understand that what they’re doing is so much bigger than themselves. Gone are the days where acceptance speeches are all about the journey that winner has been on, now it’s about challenging society to do something more and to make a change. The 87th Annual Academy Awards acceptance speeches set of a chain reaction that will affect our future in, what I hope will be, the best way possible. 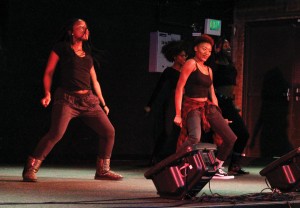