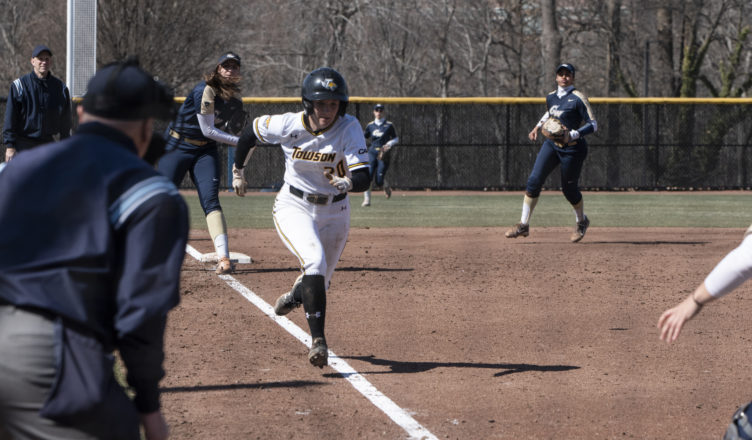 Towson had their work cut out for them as they forced extra innings in both of their games in the Colonial Classic Tournament in Washington D.C., defeating George Washington 4-3 while falling to Princeton 3-2.

“I liked how we competed this weekend,” head coach Lisa Costello said. “We were behind late against George Washington and didn’t panic and fought back.”’

The Colonials (5-12) struck first in the bottom of the third with a double steal of both third base and home plate. George Washington added to their lead the following inning, but despite trailing 2-0 the Tigers (5-6) remained confident.

“We knew that as long as we could bring the tying run to the plate, we would be able to win the game,” Costello said.

The comeback began in the top of the sixth when sophomore third baseman Chloe Poulich hit a two-RBI triple to tie the game. Sophomore pitcher Sara Johnson entered the game in the bottom of the sixth inning, and struck out the side. She struck out six batters and only allowed one hit in three innings.

With the game tied at the end of the seventh, extra innings were required. Senior pitcher Julia Smith-Harrington, who started the game on the mound, hit an RBI single in the top of the eighth that gave Towson the lead. Johnson then struck out the Colonials last two batters to clinch the game for the Black and Gold.

“Sara did a great job,” Costello said. “Julia Smith-Harrington did her job through five innings, but Sara was able to shut them down. She gave us a different look.”

The Tigers were supposed to play a third game on Saturday against Georgetown, but freezing temperatures expected on gameday led to a premature cancellation. This was the fifth game that has been canceled due to weather for Towson in 2020.

“Saturday was really cold,” Costello said. “We were fine on Friday once we started playing, but we would have never been able to play Saturday.”

The Tigers weekend started against Princeton (3-4). After Princeton jumped out to an early 1-0 lead, Towson responded with sophomore outfielder Nicole Kidwiler’s two-run home run in the top of the second. Princeton responded and tied the game. For the next four innings, the two teams combined for two hits and the game went to extra innings.

In extra innings, the Tigers struck early when senior first baseman Madison Wilson scored on an error to make it 3-2 in the top of the eighth. However, Princeton walked off with a two-run drive to left field to end the game.

“We’ve had three straight extra inning games,” Costello said. “In these tournaments, we use the international tiebreaker rule. That makes it tough when you are the visiting team, which we have been in all three.”

The international tiebreaker rule for softball states that, if a game is tied after six innings, a runner is placed on second base at the start of each inning in order to bring games to a quicker conclusion.

Next weekend will see Towson play their first home game of the season as they play host to the Demarini Tiger Clash. The Tigers will face off against La Salle on Friday, March 6 at 3 p.m.