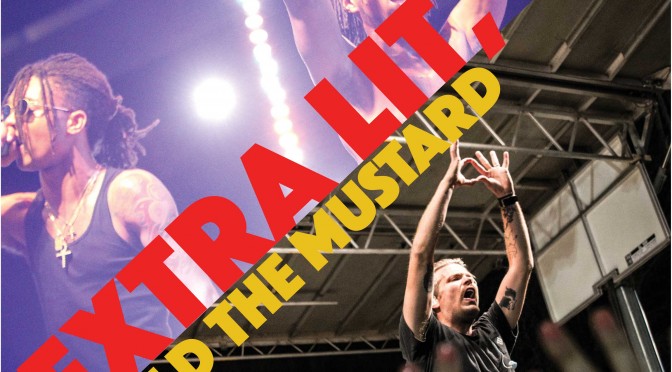 After an outdoor concert in Lot 26, day two of Tigerfest drew over 3,000 fans to SECU Arena for live performances from electronic DJ GRiZ and hip-hop duo Rae Sremmurd.

“[Rae Sremmurd] were super lit,” freshman English major Denelle Joynes said. “They were jumping out in the crowd and throwing stuff so they really pumped everybody up. The DJ was pretty cool, but people were just standing there and it wasn’t that crazy. But as soon as they came out it got super wild.”

The original lineup featured hip-hop artist DJ Mustard as the opening act for Rae Sremmurd, but a delayed flight following his Coachella performance prevented Mustard from traveling to Towson in time for the concert.

“After that it was about finding someone nearby and available,” director of CAB Ayana Bowman said. “You can’t really be picky when you have less than 24 hours to find someone else and a 300 mile radius.”

When choosing the artists for this year’s Tigerfest concert, CAB drew influence from the student survey conducted before winter break. The top genres chosen by students included hip-hop in first place, pop in second place and electronic dance music in third place.

“We were just trying to get a good mix of genres,” Bowman said. “That’s why we had 3OH!3 on Friday, which is different than DJ Mustard and Rae Sremmurd.”

Tigerfest weekend kicked off with an American-themed block party festival that featured games, food and live entertainment for students to come together and celebrate the conclusion of the semester.

One of the main attractions of day one included a free performance by Colorado electronic/rap duo 3OH!3, best known for their hits, “Don’t Trust Me,” “My First Kiss,” “I’m Not Your Boyfriend Baby,” “Starstrukk” and “Touchin’ on My.”

“We stood up in the front for two hours,” sophomore psychology major Dani Slebzak said. “We’ve been listening to them since middle school. When we heard they were going to be here and that it was a free concert, we were like ‘why the hell not?’”

The event featured opening artists DJ G Holden, Stone Age Rhapsody and Tigerer that provided the soundtrack for the festival before 3OH!3 took the stage.

“We had people there the whole time from 5:30 to 9 when we ended, so that was really great,” Bowman said.

Aside from the live music, students walked through the many attractions including face paint booths, henna tattoo stands, palm reading tables, photo booths and caricature artists. For the more thrill-seeking students, day one also featured inflatable games and a zip line.

“I’ve never been zip lining before because I’m so afraid of heights,” freshman business management major Margaret Keele said. “But it was a lot of fun. I was super nervous and once I went through with it I was like, ‘why am I afraid of heights?’”

“I ate lunch today using my meals, so I’m not going to spend $13 on pizza,” Keele said. “I’ll just wait for dinner in my room.”

This year is the first year CAB opted to host day one of Tigerfest on Lot 26, located between the Towers and Glen Garage.

“We originally were going to use the CLA field, but then the administration had some concerns about using that field so they suggested we use Lot 26,” Bowman said.

The transition to an outdoor venue pleased many students who appreciated how the openness contributed to the atmosphere of the event.

“This is my fifth Tigerfest and this is better than last year because it’s outside,” senior Emmanuel Duru said. “They’re too paranoid about the rain. My freshman year it was outside and I had the best time of my life. They should have it outside every year.”

Many of those in attendance appreciated how the sense of unity set the tone for the first day of Tigerfest.

“We all come together here and have a good time,” freshman occupational therapy major Tony Rodriguez said. “It’s not about fighting or like, ‘oh I’m a freshman,’ or ‘I’m a senior,’ it’s not about that. It’s about having a good time. Everyone I saw had a good time.”

Saturday night, during the concert, Rae Sremmurd heavily incorporated audience interaction into their Tigerfest set by inviting students onto the stage to dance with them as well as giving the audience a chance to rap along with them.

“It was the best time I ever had at Towson,” junior accounting major Jamal Mohamed said. “They gave me the mic and when they gave me the mic, I knew it was good. He waved it like he was going to throw it to me and I caught it. It made me like them a lot more and this kind of event brings a lot more spirit.”

Many students appreciated having a well-known headliner for this year’s Tigerfest concert because of the inclusivity that comes with having a popular artist.

Once the concert came to a close, many students left the SECU Arena having enjoyed the evening regardless of the lineup change.

“It doesn’t really matter as long as the artist has good music,” sophomore athletic training major Vince Motley said. “If he has good music, everyone is going to like it.”