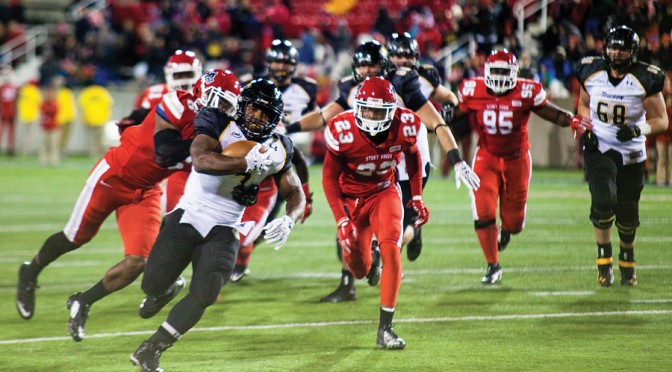 (Special thanks to The Statesman at Stony Brook University for sharing their photos with The Towerlight.)

Towson won its first CAA game of the season after junior running back Darius Victor’s last-minute rushing touchdown put the team ahead 21-14 against Stoney Brook University.

“I’m very pleased with how we finished,” Head Coach Rob Ambrose said. “They have a great defense that’s tough against the run and it’s hard to be successful there. We started the drive physical and we finished very physical. We’ve grown and gotten better and its been a huge confidence builder for us.”

The Tigers moved the ball down the field in spurts, including an 8-yard reception from redshirt senior wide receiver Brian Dowling on third down.

Redshirt senior quarterback Connor Frazier connected with junior wide receiver Jacquille Veii on 5-yard and 17-yard passes on two of the next three plays, which pushed the ball to the Seawolves’ 17-yardline.

The offense centered around Victor the next two plays, as he ran 11 yards on his first carry and then scored the go-ahead touchdown on a 6-yard run.

Stony Brook’s offense attempted a game-tying drive the next possession and made it down to Towson’s 35-yardline.

However, quarterback Conor Bednarski was intercepted by redshirt sophomore defensive back Alphonso Augustine on the last play of the game.

The Tigers ended the game on a high note but struggled early, as the team trailed the Seawolves 14-0 at the end of the first quarter.

The offense still had problems moving the ball down the field though, which caused Ambrose to put in redshirt freshman quarterback Ellis Knudson in the second quarter.

However, Frazier returned as quarterback in the second half and led a 15-play drive that ended with a 3-yard touchdown run from Victor, and tied the game. Frazier completed four passes on the drive for 42 yards and finished the game with 100 passing yards.

“Connor is one tough ball player,” Head Coach Ambrose said. “He played with attitude and when Connor is in the game, he sparks everything for us.”

Victor, who had been recovering from injuries, finished the game with 73 rushing yards and two touchdowns.

The Tigers’ next game is their Homecoming matchup against the Villanova Wildcats (3-3, 2-1 CAA).

Villanova just came off of a 37-0 win against Albany and are led by running back Javon White, who has 395 rushing yards this season. White has also averaged 5.8 yards per carry.

Quarterback Zach Bednarczyk threw two touchdowns against Albany and secured his position as starting quarterback for the Wildcats.

Towson will battle Villanova on Saturday at Johnny Unitas Stadium at 7 p.m.

Look for The Towerlight’s coverage of the homecoming game in print Oct. 24.