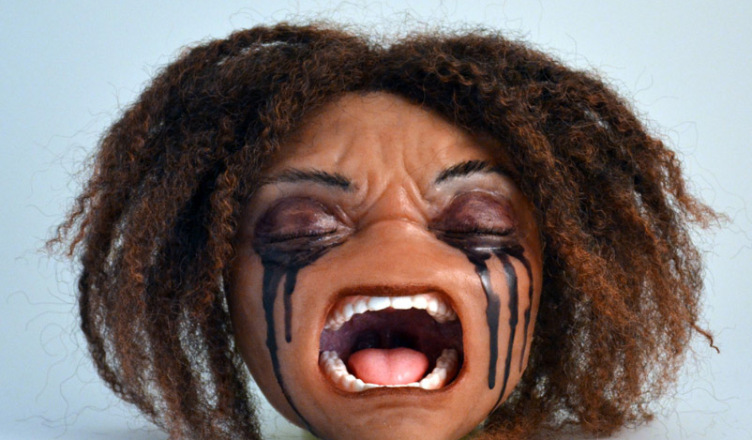 Towson adjunct and Master of Fine Arts degree candidate Hasani Claxton’s exhibit of black anime-style paintings, on view now in the Center for the Arts, shows the struggle of young black males when confronted by the police.

“It’s like all that stuff that we have to tell our kids about — Don’t wear hoodies, don’t make eye contact with the police, don’t walk around with dreads,” Claxton said.

Two paintings in the exhibit are directly influenced by Claxton’s past job as an attorney — he was the assistant district attorney in the Bronx before deciding to change careers — during the height of stop and frisk. These pieces depict black anime males in various movements.

“When a cop comes to a prosecutor they have to prove that the arrest was legal and that they had probable cause to stop and search somebody,” Claxton said. “One excuse was furtive movements, which is usually like he made eye contact and then put his hands in his pocket, it was always black and Latino guys that were suspicious.”

“I wanted to have enough paintings to create a narrative and start a conversation,” Claxton said.

In Claxton’s favorite piece, a black anime character looks over his shoulder with wide eyes. Next to his face are the Japanese symbols for glare.

“Manga, glare, it’s this thing in manga language, in anime where someone will turn around pissed off and the typography will pop up that says ‘glare,’” Claxton said.

Claxton is originally from Saint Kitts in the West Indies and now resides in Baltimore. He decided to go back to school and pursue his MFA at Towson, after obtaining his Bachelor of Fine Arts in illustration from Academy of Art University in San Francisco.

The paintings are not the only pieces showcased in his exhibit — there are also a series of silicone face sculptures Claxton says were inspired by him being the father of two daughters.

“They are meant as a commentary for the idea that women are over-emotional,” Claxton said. “So like, the ambiguous angry black women stereotype.”

Although each silicone sculpture didn’t take long for Claxton to cast, he spent hours working on the hair, putting each follicle in one at a time.

“They are small but they represent a lot of work,” Claxton said.

This exhibit marked a change that took place in Claxton’s art, a switch from realism to pieces of surrealism and brighter colors. His main goal was to examine the misconception of blackness in today’s society.

“I am hoping that it will be something that will connect with people on different levels,” Claxton said. “So like, some people look at this with the political idea behind it and then other people will just think it’s cool.”

Claxton’s “Rise of the Afrotaku” paintings and sculptures will be on display in the Holtzman MFA Art Gallery until April 1.