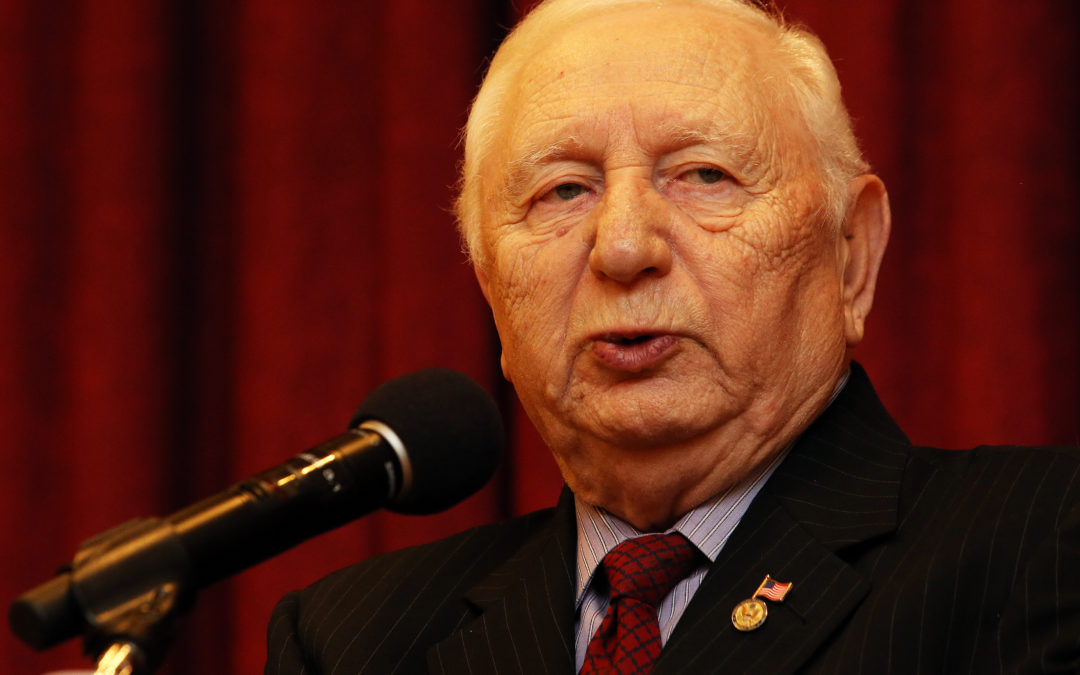 Howard Kaidanow was with his 8-year-old brother in their family’s backyard when they heard gunfire. Their mother hid them in straw behind the house before the Nazis came. Later, Kaidanow found her in a pool of blood. The Nazis had nearly beaten her to death before shooting her.

Kaidanow recounted his experiences as a survivor of the Holocaust at Towson Hillel and the Department of Early Childhood Education’s fifth annual Holocaust survivor speaker for Holocaust Remembrance Day, also known as Yom HaShoah, April 24.

Kaidanow and his brother hid in that straw for two days and two nights before getting to their aunt, who was staying at a friend’s house.

Kaidanow was born in a small town in eastern Poland in 1921. He said his family lived a normal middle class life until his country was split in two by forces from Germany and the Soviet Union.

Kaidanow said his parents owned a small business, but couldn’t anymore when the Soviet Union invaded. At this point, Kaidanow said everyone worked for the government, there was “no private anything.” Religion of any kind was “strictly prohibited.”

The same day his mother died, Kaidanow said the Nazis took 50 Jews – including his father – forced them into a barn, lit the barn on fire and burned them to death.

“I can’t even explain what they did to us,” Kaidanow said. “I’m going to try, but it’s hard. People shouldn’t do that to people. Even animals don’t do that to themselves.”

“I think we have an obligation and a responsibility to hear these stories,” Harvey said. “Although they are sometimes hard to hear, it’s important for them to be heard so we never forget what happened. We need to keep telling our children and our children’s children, because eventually those who are surviving now aren’t going to be here forever. It’s important to keep stories alive even when they’re gone.”

After the war, Kaidanow’s aunt took him to Munich, Germany to finish his education. He later went to medical school for two and a half years, but he suffered a head injury in a car accident that caused him to have trouble remembering what he learned.

“I worked hard and made sure my kids were educated,” Kaidanow said.

Kaidanow said he came to America, where he met his wife, 56 years ago. He now has two children, one a lawyer in New York and the other a Principal Deputy Assistant Secretary for Political-Military Affairs at the U.S. State Department.

“You can’t go on hating,” Kaidanow said. “If you go on hating long enough it’s not healthy to hate everybody. But I remember. I don’t forget.”

Towson Hillel President Rachel Fredman was pleased with the turnout of the event.

“I thought the event went really well,” Freedman said. “It was really nice to have so many people come and care to hear what the speaker had to say.”

As part of Holocaust Remembrance Day on April 24, Towson Hillel also welcomed people to read the names of those who died during the Holocaust from 9 a.m. to 2 p.m. in Freedom Square.