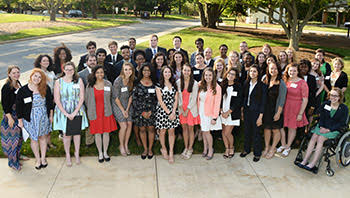 In a new effort called “No Hunger November,” Towson’s Presidential Ambassadors have partnered with Housing and Residence Life to encourage students to give to the university’s recently-developed food insecurity support fund, which assists students with little access to food.

The initiative raised over $3,000, according to the Presidential Ambassador’s Instagram page.

According to Student Philanthropy Manager Conor Reynolds, over 400 Towson Run apartment-dwellers are involved in this effort, and students will compete by floor to raise the most money for the fund.

Touhey acknowledged that most students are unaware that a fund exists that helps provide assistance to Towson students. Once they learn about it, she said they usually “are more than willing to give $5 toward it.”

The food insecurity fund is a support system for students who are food insecure, meaning that they have “limited or uncertain access to adequate food,” according to the United States Department of Agriculture.

Touhey said that the students most affected by food insecurity come from lower income families or are first generation college students.

With the high cost of higher education, day-to-day purchases such as food can be foregone in the face of other expenses.

Touhey explained that the accumulated money in this fund is disbursed to qualifying students on their OneCards in order to eliminate the stigma of going to a food bank. This allows them to “have dinner with their friends… without having to worry about where their next meal is coming from,” she said.

Christina Olstad, program manager of the Food Insecurity Support Fund, said about 23 percent of Towson students would qualify for some sort of emergency aid—though fewer than a dozen students have so far worked with her to receive it so far.

“I know there’s a need,” Olstad said. “We haven’t had as much demand as we know is out there.”

Olstad said that all a student has to do is reach out to her through her email or office phone number to meet with her and see what kind of aid they may qualify.

Olstad is able to put an “emergency” $25 on a students’ OneCard once per semester if they qualify.

Director of the Annual Campaign Brittany Shaff confirmed that a campus survey will be going out to assess Towson’s current needs.

In October, Presidential Ambassadors introduced the Greek Philanthropy Challenge, which encouraged Greek fraternities and sororities to raise money for the food insecurity fund.

Chapters in each of the five Greek Life councils competed to have either 100 percent participation or the highest donor participation within their respective councils.

The chapters with the highest participation won $250 in their SGA accounts.