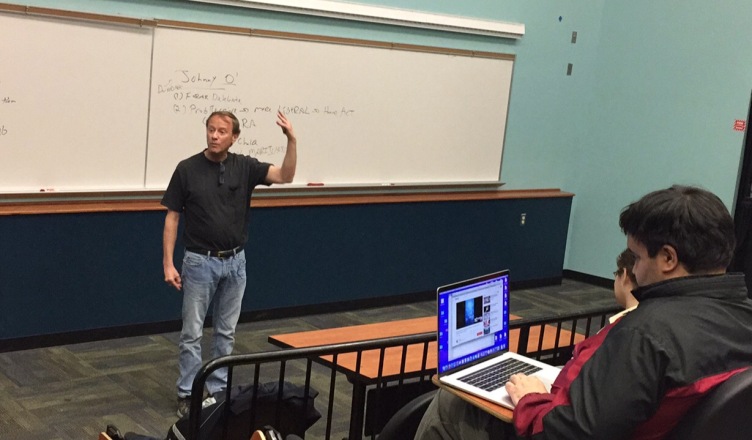 Photo by Keri Luise, The Towerlight

American Democratic politician Jim Brochin came to Towson University professor Richard Vatz’s persuasion class May 10 to discuss his running for Baltimore County Executive and the strategy he plans to use.

Vatz invited Brochin to speak to his class because he had him as a student several years ago and values his character.

“He and I disagree politically, but I always found him to be a man of very high integrity, very high to character,” Vatz said. “He’s one of the most consistent politicians – he doesn’t say one thing in one place and then change it in the next place. I think he’s so prepared. I think he does a great deal for the students because he really knows the issues, can really talk about them and he answers questions directly, he doesn’t avoid them, and I like that very much as well.”

“I’m running against two people so it’s a three-way primary race,” Brochin said. “It’s complicated and I’m confused as strategy and how you strategize.”

Brochin has been in office 15 years, and has run in five elections, but only one of those was a primary race.

He said this is “because I represented such a conservative district that democrats have never run against me in a primary except in 2014. So, this whole strategy we’re talking about and employing, it’s important to note that we’re running in a primary with democratic voters to turn up for me and vote.”

Brochin said he is also struggling with deciding whether to do polls verses more television, radio, or direct mail to brand himself more as he is just days away from the election on June 26.

“Political polls are really expensive,” Brochin said. “And a poll is only a snapshot into right now; it’s not a snapshot into the future, and things change dramatically in politics.  chose the television, radio, and direct mail because I do believe that when you’re running for office, your presence, most of your budget should go towards that.”

Brochin went on to explain each of his opponents and the strategies and issues that they are focusing in on, and how he is planning his strategy compared to them.

Baltimore County Councilwoman Vicki Almond is Brochin’s first opponent. She is from Catonsville, Maryland and has been in office for seven years.

“The big issue that she’s focusing on as well as myself is school violence,” Brochin said. “The other thing that she talks about a lot in the three forums that I’ve been in her with is that when she was a community activist that she helped with the plan with school resource officers which deals with school violence.”

According to Brochin, Almond also talks a lot about possibly being the first woman county executive.

Brochin and the persuasion class had a discussion about whether this was an effective tool to use while running for the campaign. It circled around if women should use this merely as a way to get votes or use it as a way to showcase how they will be different and move forward with more material things.

“Haven’t women been neglected long enough in politics?” Brochin asked. “I mean I sit in a senate and women are not representative of what they should be in the senate in regard to populations. And it’s actually gotten worse.”

One other point Brochin brought up in relation to Almond was the topic of development.

“We have countering opinions on the issue of economic development and preserving land, which is what most of my campaign is really about, which is about protecting open space, stopping pay to play politics in Baltimore County, and making sure that money doesn’t influence land use decisions – the land use decisions are based on their own merit and that we take campaign contributions from developers out of this,” said Brochin.

Brochin then went on to speak about the strategy of this second opponent, Johnny Olszewski. He is a former delegate from Dundalk and is running as a progressive.

“The ones who are going to vote are the ones who you want to get to and if you say that you’re the progressive you attract those and those are the ones who vote for you and then you win the primary and can go onto the general since the democrat is probably going to be the next county executive,” said Brochin.

Brochin doesn’t believe Olszewski is a true progressive and disagrees with him on several topics; Olszewski is pro NRA, anti-choice, against stem cell research, and against medical marijuana.

Brochin emphasized, how aside from going against the topics Olszewski supports, he personally wants to stop developers from getting access to all the land they want. He said he wants to build the first opioid treatment center in Baltimore County and looks to find better ways to deal with the homeless population in Baltimore County.

Brochin referenced Housing First, a homeless assistance approach, as a guideline for aiding the homeless.

Brochin is also largely running to stop pay to play where developers can tear up any land they want without council planning.

“If I’m County executive there’s going to be a lot of development opportunities,” said Brochin. “The concept of smart growth, which I believe my opponent doesn’t use properly, is that you have housing stock and you have apartments and townhouses and things like that where their infrastructure isn’t there and the urban outlays aren’t there.”

Junior Communications major Abbey Manon enjoys learning what politicians choose to make part of their agenda and liked how Brochin specifically “outlined everyone’s different opinions and showed how he is deciding what to address, what not to address by other people. I think it really helps us to learn like the importance of choosing what you stand for based on principles.”

According to Manon, the persuasion class “is all about spin and agenda and learning about the words people chose and how that creates their persona, so that’s kind of what I learned from this – it’s like what he has chosen to make part of his persona in this election.”

Vatz said he was glad Brochin could come speak to his students and hoped they got something out of it.

“I hope they see that, as they do with a lot of my guests, that the guests I have in class are really good at what they do and really know what they’re talking about even if I disagree with them,” Vatz said. “And I don’t disagree with all of them but I think Jim Brochin, his integrity is tremendous and I think it helps the students see that kind of person in politics, not some of the people in politics who are kind of sleazy, because he’s not.”