On December 31, 2017, Business Insider published a misleadingly titled article called “Chocolate is on track to go extinct in 40 years.” In the weeks leading up to Valentine’s Day, the article has made its rounds across social media. While the headline may not be truthful, it’s unsurprising that people panicked over the idea of their favorite sweet treat disappearing from the face of the Earth. In 2009, Americans purchased 58 million pounds of chocolate during Valentine’s week, according to Nielsen. While there are several ways to express your love for a romantic partner (check out our Q&A with staff members from the Counseling Center in this week’s issue for advice on how to properly communicate with your partner), chocolate has become one of those time-honored gifts associated with the lovers’ holiday.

But within the panic that the article created, the story’s true message may have been lost on some. Cacao, the plant from which chocolate and other cocoa products are made, can only grow 20 degrees north and south of the equator. Côte d’Ivoire and Ghana produce more than half of the chocolate in the world, according to the National Oceanic and Atmospheric Association. As human activity worsens the already serious problem of global warming, the cacao’s current habitats could become too warm and dry to sustain the plant. As NOAA points out, the increased heat alone is unlikely to have a significant effect on cacao, which are made to survive hot temperatures. But without an increase in rainfall to accompany that heat, evapotranspiration – the evaporation of water from soil, plants and water bodies – could result in a lack of humidity that cacao needs to grow. NOAA predicts that by 2050, those warmer temperatures would push cacao plants over 1,000 feet uphill, but some of those areas are currently reserved for wildlife preservation. So while cacao probably won’t be going extinct in the next 40 years — the International Union for Conservation of Nature will label a species extinct only if there is “no reasonable doubt that the last individual has died” — the plant’s population could be dramatically reduced.

Some have offered carob, an evergreen tree whose pods can be ground into powder and mixed with vegetable fat and sugar, as a substitute for cocoa. “Of course, the same arguments can as persuasively be made in favor of dirt,” said “CHOCOLATE: The Consuming Passion” author Sandra Boynton. So instead, scientists are looking for ways to save your beloved chocolate. That’s where the Business Insider article comes in. Scientists at the University of California partnered with the Mars company, which manufactures chocolate among other products, to explore the use of a gene-editing technology called CRISPR. The team hopes to use CRISPR to alter the DNA of cacao so the plant can survive in drier, warmer climates.

At face value, this possible scientific progress sounds pretty cool – and it is if done under the right circumstances. For example, creating plants that are able to grow in harsh conditions could decrease food insecurity and improve economic equity in less developed countries and regions. But there is something unsettling about altering our food’s genetic makeup as a solution to an issue that humans have caused. If we keep tweaking plants and animals to adapt to our problems, rather than reevaluating our behavior to better preserve the environment, we will lose the Earth that we know today.

Instead, look at the ways you are impacting the environment. Reduce your energy consumption by using cold water to wash clothes and dishes, taking shorter showers, turning off lights or unplugging electronics when not in use. Drive less or carpool if possible – even walking or biking across campus instead of driving from the Union to West Village garages can help reduce certain greenhouse gas emissions from your vehicle. Landfills are major producers of methane, so be sure to reduce, reuse, recycle and compost your waste — and educate yourself about the proper procedures for doing so; don’t just throw stuff in those bins willy nilly. Over all, do your homework. We’re not perfect, but if everyone makes an effort to improve their environmental impact, the Earth and the future generations it will be home to will thank you for it. 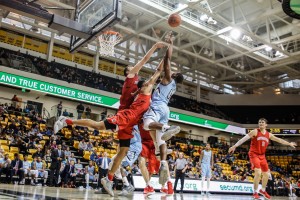