F*** cancer. I try to avoid using profanity in my writing, but f*** cancer.

At this point in our lives, we all know someone who has been touched by cancer in some form or another.

In November, my mother was diagnosed with kidney cancer. When they first found the spot on her kidney, which was through complete blind luck that she was having a CT scan in the first place (she had pneumonia), it was weeks of not knowing. Anything.

It was weeks of more tests, more scans and more of the unknown. I regularly had to ask myself “Is my mom going to die?”

On one particular drive back to Towson, I had the internal conversation with myself about what living my life without my mom would be like. And it was terrifying.

Thankfully, the doctors at Johns Hopkins did an amazing job of treating my mother, and after a surgery she has been declared cancer free and only needs to follow up with more scans years down the road from now.

But thinking about the sinking feeling I felt when my mom walked through the door to my house during one of her appointments and she said, “It’s cancer” makes me connect to those who have been stricken with cancer who is caring for someone with cancer on a much deeper level.

I have great respect for the caretakers of those with cancer, and even more respect for former Towson President Maravene Loeschke for the courage that she is showing in her battle against cancer.

To much of campus and the community’s dismay, news came out over spring break that Loeschke has been given two weeks to two years to live. What started as adrenal cancer for her has moved to her abdomen.

All the while, her husband has been dealing with dementia following a stroke.

I read the profile on her in The Baltimore Sun, and I frankly couldn’t think of anything else The Towerlight could do to cover this story. It’s incredibly sad, and Joe Burris at The Sun did an excellent job of capturing Loeschke’s attitude.

“I don’t know what a luckier life looks like,” Loeschke said to The Sun. “Mentorship is one of the primary responsibilities we have, to live a life in the world where you give back. I have lived the best life I possibly could have lived.”

When my mom had cancer, I didn’t deal with it this well. And for a person to show that much poise and courage being the one who has the cancer amazes me. I could never be as strong of a person as Loeshcke is being through this.

I haven’t seen Loeschke since she came into The Towerlight office before an SGA meeting last semester.

I don’t remember exactly what she said to me, Cody Boteler and Mike Raymond that day, but it was something to the effect of, “I don’t care if I have five weeks or five years to live, I’m just going to make the best of it.”

That was just weeks before my mom would receive her news, and it’s something that I kept in my mind during the months leading up to her surgery. No matter what was going to happen to my mom, I knew it was important to only put forth positive energy and be there for her.

From her home in the Blakehurst retirement community where she now resides, Loeschke also told The Sun, “My responsibility is to make the most of this. I have a lot of good days right now.”

That’s an attitude we could all afford to carry with us every single day.

It’s easy to get caught up in midterms or graduation or job applications at this point of the semester. But always remember that there are people out there, such as Loeschke, who are facing much larger problems and are carrying such a positive attitude toward facing those problems.

I’m thankful every day that my mom didn’t have to go through chemotherapy or more surgeries, and I hope she never has to. But should anyone in my family or any of my friends be diagnosed with cancer, I could only hope to handle it with the poise and courage that Loeschke is.

I, and the rest of The Towerlight staff, send our thoughts to Loeschke and her husband, and we hope that she continues to have even more good days.

One thought on “President Loeschke, strength and attitude” 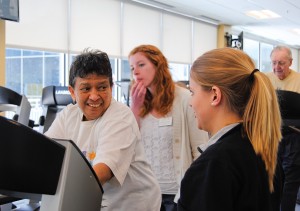