Professor Beth Haller has become the first author to examine and compile Helen Keller’s newspaper and magazine writings into a book.

The book, “Byline of Hope: Collected Newspaper and Magazine Writing of Helen Keller,” includes contributions from Keller in publications like Good Housekeeping, Ladies’ Home Journal and The New York Times.

​While visiting a friend at the American Foundation for the Blind in New York City, which houses the Helen Keller archives, Haller noticed multiple magazine columns written by Keller in the 1930s.

From there, Haller sought out Dorothy Herrmann, a Keller biographer, to confirm that these writings had not been mentioned in previous publishing.
None of them had.

​“I felt like I’d stumbled onto something that people didn’t even know about,” Haller said. 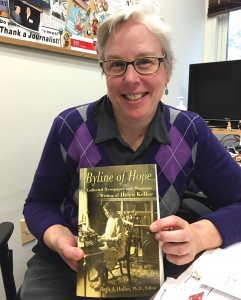 Keller had an international presence and was a deaf-blind icon in the United States. She was beloved in many countries and met many people of royalty and power through her travels.

​“I think people are ultimately fascinated by how she lived her life,” Haller said.

​One of Haller’s favorite essays revolves around an instance when Keller and her nieces visited the Bronx Zoo and were allowed into the cages to touch the animals. Keller wrote about her experience petting the lions and elephants.

​“She really loved her sense of touch,” Haller said. “All those touch things meant something to her.”

In addition to her writing, she also travels to both nationally and internationally discussing such topics.

​She describes her work with media and disability as a lifelong research agenda that not many people take on.

​For Haller, this book touched on another of her passions.

​Haller said that she hopes that this book will help readers discover Keller as a writer and thinker and not only as the young girl pictured in the film “The Miracle Worker.”

Haller also hopes that readers will be as inspired by Keller and her writing as people were during their original debuts during the Great Depression.

​“I think people were drawing some hope just from seeing her byline, even if they didn’t read her articles,” she said.

​Haller has donated two issues of “Byline of Hope” to the Albert S. Cook Library. Her book is also available at Avocadopress.org and on Amazon.

​Haller, who credits Keller as a genius, sees her unique perspective on life as a gift that Keller wanted to give others.

​“I hope that people will read about her and know that they also can go out and do whatever they want, whatever they set their minds to, because that’s what she did,” Haller said.