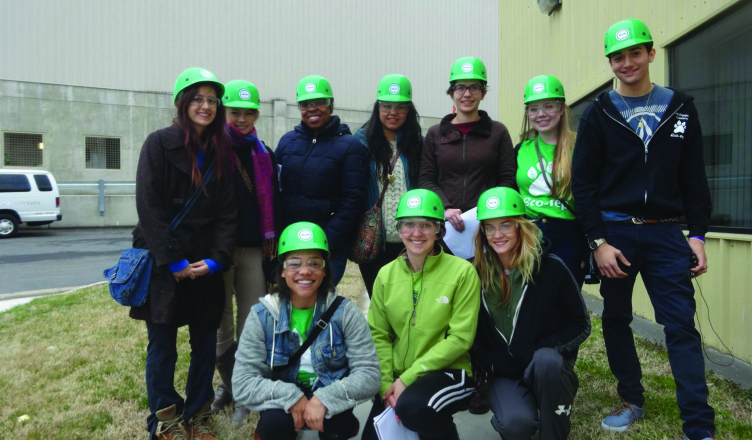 Since 2007, Towson’s Eco-reps and the Office of Sustainability have hosted an eight-week, campus-wide recycling and environmental awareness event called RecycleMania. That time of year is approaching again, and 2017’s theme is an important one: waste reduction.

Daniela Beall, a graduate assistant for environmental initiatives who’s heading RecycleMania this year, said that almost all students care about recycling and taking care of the environment, but that they don’t necessarily know what the rules are.

“It’s a little confusing, and I get that,” Beall said. “That’s why we’re trying to educate students about it.”

RecycleMania runs through February and March with a litany of events and initiatives that encourage students to take better care of the environment. Since this year’s theme is waste reduction, recycling and composting will be emphasized.

Groups of students in Douglass House and Millennium Hall, for example, will be trained to compost their waste and will attend training sessions where they’ll learn what materials are compostable, how to record their compost and how to dispose of their compost properly.

While the compost initiative is only open to two residencies this year, Campus Planning and Sustainability Manager Patricia Watson hopes that it will eventually spread to every residency.

“We wanted to make sure we were being successful in our approach and not just to open it up to anyone, because we do have to be pretty vigilant about the accuracy of the waste stream,” Watson said. “There’s only one site in the state of Maryland at this time where we can send our compost, and if it’s too contaminated, they can deny us. And that would harm the program for the entire campus.”

Any student (or faculty or staff member) can take part in the events of the next eight weeks — and there are many, with opportunities for anyone to learn how to reduce their waste and leave a smaller footprint on the Earth:

The Eco-reps will be tabling from 10-12 p.m. in the Union lobby. Interested students can stop by and learn more about RecycleMania, take a pledge to reduce their waste, play a few rounds of cornhole or the “decomposition game” and try to win coffee mugs, buttons and pens.

At SECU Arena from 6:30-10:30 p.m., while the Tigers play Hofstra University, volunteers will help fans learn how to sort their waste through games on the concourse. The goal is to produce a zero-waste event (and a win for the Tigers, of course).

“By definition, zero waste is diverting 90 percent of the waste generated from the landfill, either through recycling or composting,” Watson said. “So you’re left with a tiny percentage of landfill waste.”

Interested in making a recycled Valentine’s Day card for your sweetheart? Students can participate in the DIY card-making activity from 10-2 p.m. in Cook Library, where they’ll also learn about reducing, reusing and recycling, and about the library Starbucks’ new compostable cups.

“If the students check their cups and see if it says 100 percent compostable, they can throw it in the compost bin,” Watson said. “Even the lid should be compostable, and even the plastic cups.”

On these three consecutive Wednesdays, students can play games, learn about preserving the environment, and win #wasteEd t-shirts in the Union.

There are also three field trips planned that in years past were exclusive to Eco-reps and are now open to anyone interested. The first trip will be on March 10, to the Prince George’s County Compost Facility, where the university’s compost gets sorted and processed. On March 17, the field trip is to a recycling facility in Cockeysville, and in April, students can see what goes on in the Baltimore incinerator. Anyone interested can sign up on the Eco-reps’ Facebook page.

Towson continues to strive for a more Earth-friendly campus.

“Our compost program has jumped dramatically,” Watson said. “In 2015 we composted 103 tons and then last year was 166 tons of compostable material, which is over 332,000 pounds of material. In terms of landfill, it’s over 5 million pounds of waste coming off of this campus annually. So there’s a lot of opportunity to divert that, and most of that is food waste packaging. We consume a lot, we can divert a lot, so we need to be a lot better about doing that.”

Watson acknowledges that it isn’t always easy to keep track of waste and where it goes, but that’s one of the reasons why RecycleMania is important and currently in its eleventh year.

“It’s not necessarily the easiest or most interesting topic for some students to engage with. How do we make it relevant to them? And more accessible?” she said. “We know we have 22,000 students to help us reach our goals and help the environment.”