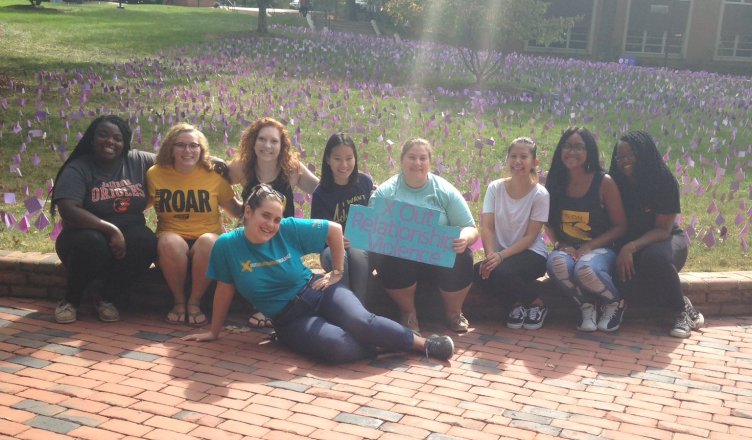 January is National Stalking Awareness Month, and Sexual Violence Prevention Educator Kailah Carden is working alongside Towson’s Sexual Assault Peer Educators to use a social media campaign for awareness on the issue of stalking as a form of sexual violence within the Towson community.

The campaign involves the peer educators posting one fact about stalking every day in January, which includes information about prevalence of the issue, what stalking is, resources for those affected by stalking and simple things students can do to protect themselves, specifically with online safety, according to Carden.

“I think ‘stalking’ is a word that we might throw around, and use casually, or even humorously, like saying ‘Oh I stalked you on social media,’ or something like that,” Carden said. “But I think it is very important for students to be aware that stalking is one of the prohibited behaviors in the Towson University sexual misconduct policy.”

Freshman Bradley Stansbury recognizes the work of the campaign as vital because of what stalking may lead to.

“It’s incredibly important to be aware of the actions that stalkers do that can lead to other, more detrimental things, like sexual assault,” Stansbury said. “I have friends that have been stalked, and it’s an issue that isn’t addressed often. If students know how to recognize and address stalking, then I think Towson’s campus would be even more safe and friendly than it already is.”

Carden addressed the issue of being stalked by someone within the Towson community.

“It’s also something that could interfere with someone’s ability to perform as a student at Towson, and especially if it’s happening by someone else in the Towson community, which could make them uncomfortable attending classes or being comfortable where they live, or being unsure when they will see this person,” Carden said. “So that’s kind of the emotional distress portion of what it really means.”

Freshman Emily Briggs noted that resources for victims are important due to the emotional effects of being harassed.

“Ultimately, nothing is more terrifying than feeling like you’re unable to go somewhere because you are afraid that you will run into someone you don’t want to see.”

But, stalking is more than just an in-person issue, with social media being a heavy influence. Carden noted that preventing location tagging on social media platforms is one of the biggest precautions students can take to protect themselves and their friends.

“Even if you aren’t experiencing an unsafe situation with stalking, just think about how it may impact other people,” Carden said. “For example, if I take a picture of my peer educators, I always make sure I have permission to post it and ensure the location isn’t available, in case one of those students may be experiencing an unhealthy relationship or stalking, because that’s a way someone may be able to find their location and harass them. Just thinking about things [like] geotagging, location sharing and even if it isn’t a concern for you, think about how it could impact someone else.”

Freshman Franklin Biggs noted that social media, such as Instagram, can blind people to how stalking impacts other people.

“I had a friend who use to make girls uncomfortable, and when I confronted him with the problem he saw no wrong in his doing,” Biggs said. “I’ve had many female friends saying he stalks them on social media, and my advice to them was just to block him and any other unknown user who requested to follow them.”

One of the most important results of this campaign is awareness on the resources provided for those impacted by stalking, according to Carden.

The Office of Inclusion and Institutional Equity is where students can to delve into the legal aspects of stalking, such as investigations or hearings on cases. If a student is seeking further legal action, the Sexual Assault Legal Institute, run out of the Maryland Coalition Against Sexual Assault provides free legal advice to those who want to go further into the issue, according to Carden.

Carden also noted that the Counseling Center has a partnership with TurnAround, a local domestic violence center which also offers a 24-hour hotline and professional advocates in counseling.

“Stalking is prohibited in our policy, which means that we have resources for people who have experienced it, so they still have access to their education,” Carden said.