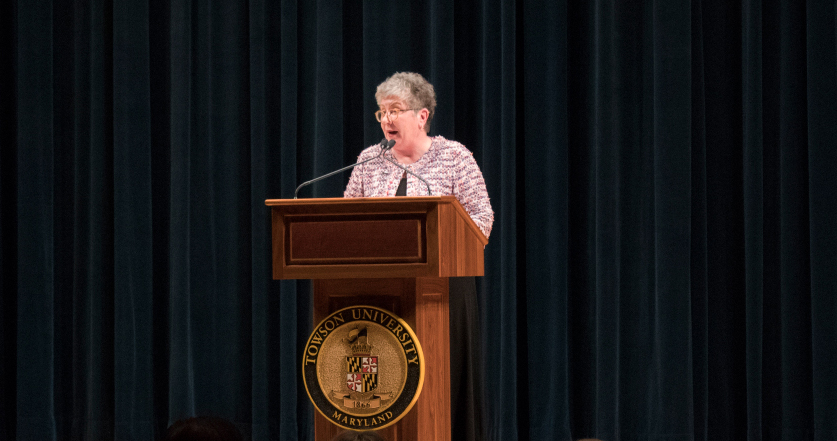 Photo by Isabelle Bartolomeo/ The Towerlight

Towson University President Kim Schatzel said Wednesday that the University is calling its continuing community partnership “Together Towson,” as TU works to gain RISE Zone designation from the state of Maryland.

The RISE Zone designation would increase its economic development impact with community partners.

Schatzel highlighted the University’s ongoing growth during her annual spring presidential address in the Recital Hall of the Center for the Arts building.

This was the first year the presidential address was not held in Stephens Hall, due to construction on the new Science Complex. To make up for the Recital Hall’s limited capacity, the address was live streamed for the first time on the TU website.

“I hear that word again and again when I talk to faculty, staff, students, legislators and partners,” she said. “We see strong evidence of that momentum all over this beautiful campus.”

Schatzel said the number of applications for the fall 2018 semester has increased by nearly 10 percent compared to last year’s historic number.

Over 1,200 students transferred to Towson this spring, marking the University’s largest spring enrollment ever, Schatzel said.

“Best of all, Towson University’s six-year graduation rates – often cited as the indicator of a University’s success – are strong and growing even stronger,” she said.

Since 2001, Towson’s graduation rate has risen from 66 percent to 72 percent, which is 13 points higher than the national average of 59 percent.

“This data tells us that for the  23,000 students enrolled at TU, the second largest university in Maryland and the 73rd largest in our nation, student success is defined as inclusive of all our students,” Schatzel said.

Schatzel said Towson University’s diversity gives students an advantage as they enter the professional world as “mediators and solution-seekers,” two traits she said are always in high demand.

“A diverse and inclusive campus supports student success during and after college,” she said. “Students who learn to thrive and support other to thrive inclusively are completely advantaged when they enter the global world of work.”

“TU athletes once again have the highest NCAA graduation rate of all Division 1 USM (University System of Maryland) institutions,” she said.

According to Schatzel, Towson’s baseball team has the highest graduation rate in the Colonial Athletic Association, and the field hockey, women’s soccer and women’s swimming and diving teams have 100 percent graduation rates.

Schatzel recognized the successes of several Towson University faculty members, including a team of computer and information sciences faculty who secured a $3.9 million grant from the National Science Foundation to expand Towson’s Cyber Corps program.

“Momentum is not just about moving – it’s about moving forward, leading in the right direction, world-class teaching and research standing as an anchor for our community and a sought-after partner that is committed to making a difference,” Schatzel said. “That is what our outstanding faculty are doing and that is how TU is leading in a way that sets the standard for higher education in this nation.”

Schatzel said the 2018 Maryland legislative session, which ended on Monday, showed that Governor Larry Hogan and state lawmakers are “eager to support” Towson.

This support comes in the form of funding for the new Science Complex to be completed in two years, the upgrades to the South Campus athletic fields, plans for a brand-new building for the College of Health Professions, and a total renovation and 85,000 square foot addition to the University Union.

“I hope you’re getting used to the cranes and cones,” Schatzel said. “Because we are just getting started.”

Partnerships Manager Kathleen Crostic enjoyed hearing about the Towson’s momentum as an institution.

“It is exciting to hear about everything moving forward,” Crostic said. “It is always interesting to hear updates.”

Physics professor Vera Smolyaninova said she was very impressed with the University’s progress.

“It is very good to hear what Towson is doing great at,” Smolyaninova said. “As faculty, we are usually so focused on our specific teaching that it is refreshing to hear about the overall picture.”

Schatzel, who became Towson’s president a little over two years ago, reflected on the progress the University has made in that time and promised “great things ahead” for Towson University.

“When I look back on the University as it was then, it was and it continues to be a campus with a growing reputation for achievement and excellence,” Schatzel said. “A campus that is vibrant and vital to the future success and prosperity of Greater Baltimore and Maryland.”