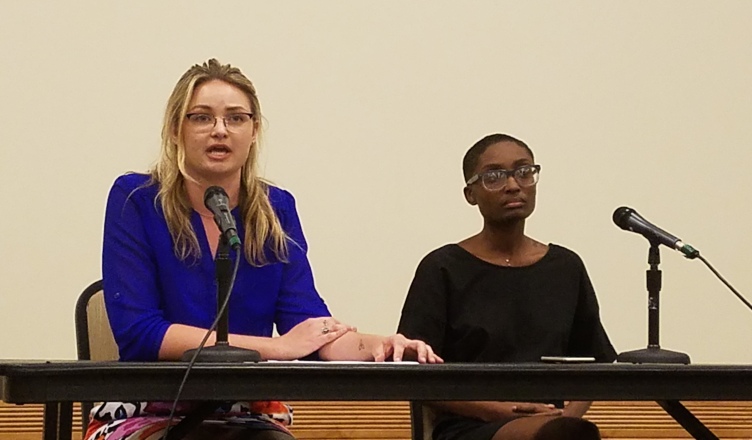 The SGA candidates expanded upon their ticket’s platforms and their personal initiatives during a candidate debate in the West Village Commons Ballrooms on May 1.

The debates, which were co-moderated by The Towerlight’s outgoing Editor-in-Chief Cody Boteler, featured the candidates for attorney general, treasurer, vice president and president from both tickets.

Senatorial and judicial candidates also addressed the audience by giving brief statements about their backgrounds and initiatives they would like to accomplish should they be elected.

Arianna Anderson-Melton, candidate for attorney general on the Legacy ticket, said that before coming to Towson, she attended a historically black college where everybody was included.

Pointing to the split dynamics of the room, Anderson-Melton said Towson is more divided than her previous institution. She said students must understand one another better to work together effectively.

“I think this is the biggest problem [within the SGA] and it starts with us working together initially,” she said.

Rishell Chambers, candidate for attorney general on the URTU ticket, advocated for a group accountability system to hold SGA members responsible to their constitutional duties.

Makdes Hailu, candidate for treasurer on the URTU ticket, wants to educate students about the funding that SGA offers.

Hailu also wants to expand transparency between SGA and the student body by holding a forum at the beginning of every year to explain to students what the SGA is spending their money on in that fiscal year’s budget.

She said SGA should be “at any opportunity that we have, making sure that we’re asking students ‘okay, how should we be reforming our policies?’”

Cristiana Saballos, candidate for treasurer on the Legacy ticket, wants to minimize the requirements that student groups must complete to receive funding and help students maximize the money that is allocated to them.

Saballos also criticized the amount of money that SGA currently spends on its members, such as expenses for retreats, which she called “unnecessary” spending. She wants to put that money toward student organizations and the student body overall.

“We are here to serve you,” Saballos said. “We’re not here to take your money.”

Missy Ronan, candidate for vice president on the Legacy ticket, wants to instate 24 hour shuttle services to give students safer mobility, and continue the work that she has done with the It’s On Us campaign by promoting bystander intervention training and resources for survivors of sexaul violence.

Ronan said she wants to empower senators to be more autonomous and to have them take more initiative in meeting students’ needs.

Ronan also said she believes senators need to be better prepared for what their position entails, and also hopes to improve communication and understanding within the SGA.

“I think SGA as a whole needs to have more cultural competency training so we can understand each other more,” she said.

Breya Johnson, candidate for vice president on the URTU ticket, said she will fight for social justice and the rights of marginalized people on Towson’s campus and in the Baltimore community.

“I believe in the student government that is accountable and that has empowered senators,” Johnson said. “I believe in a university that is guided by the wants and the needs of the student body…. I believe in giving back to the people who need it the most.”

Johnson cited her work in changing “gender neutral” bathrooms on campus to “all-gender” bathrooms as one of the ways she is making Towson more inclusive.

She said she has also advocated for prison divestment, criticizing the Legacy ticket for including it on their platform.

Pat Mascio, candidate for president on the Legacy ticket, wants to raise Towson University to a national presence and bridge the gap between TU and Baltimore City communities.

“The reason why I want to be your president is simple: I dream of a better Towson,” Mascio said. “I believe in the potential of this university to become a nationwide powerhouse.”

Mascio said that when he came to Towson from his predominantly white suburban neighborhood, he was not initially culturally competent about the diverse identities that he encountered.

Mascio explained that Chambers and Johnson, both members of the opposing ticket, held him accountable and helped him listen and learn from marginalized voices.

He said he worked with the president of Towson’s Queer Student Union to write the initiative aimed at expanding the rights of transgender students in the state of Maryland last year.

As part of the Building Naming committee, Mascio said he has worked to make sure that “our university does not name our buildings after racists slave owners or people who were engaged in negative philanthropy.”

Serving on that committee has prepared him to work with University administrators, Mascio said.

Mascio said the Legacy platform goes beyond the next SGA administration; it is meant to establish a lasting change at Towson.

“Our platform isn’t about just next year,” he said. “Our platform looks five, 10, 15 years down the road to set this university up so that every student can come here and lead their legacy.”

Mileo cited the work he has already completed with Johnson and members of Occupy Towson to create emergency mental health attendance procedures, so that student can obtain a document for an excused absence from class.

“I want to continue this work to continue to accommodate students with mental health issues because just like you need to go to the doctor for your physical health, you need to do it for your mind as well,” he said.

“It’s not my job to empower someone else,” he said. “It’s my job to be providing the resources for them to empower themselves.”

Mileo said he has worked with the SGA Senate chair and the Faculty Senate chair to ensure that students, faculty and staff have an equal voice in decisions that affect Towson.

“Student decision-making is already at the forefront of our platform and I’ve already begun this work and I promise to continue this work,” he said.

Mileo said that while the Legacy ticket has promised change, the URTU ticket has already begun executing their own goals.

“We are making this your Towson,” he said. “We’ve already started the work.”

Senior mass communication major Nicole Trainor said she plans to support URTU in this year’s SGA election. She said she believes URTU is committed to building community together, whereas Legacy is only focused on individual students leaving their marks on Towson.

“[URTU] don’t just talk the talk, they walk the walk,” she said. “You can see what they have already accomplished, what’s in the works.”

SGA Solicitor General Omnia Shedid supports the Legacy ticket, and said that she hopes the winning ticket will understand what being in SGA truly entails.