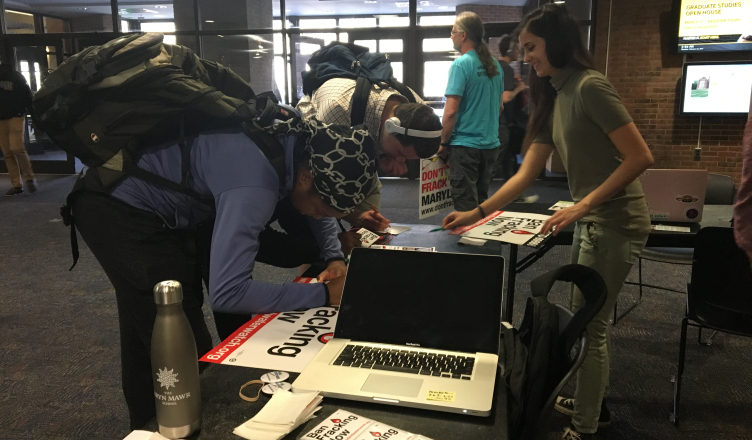 Towson’s Student Environmental Organization recently teamed up with Ban Fracking Now to educate the student body about the dangers of fracking and collect signatures to pass on to Maryland legislators.

SEO member Haley Denton that most students don’t know what fracking is, so it was important to the organizers that the effort was both to educate and advocate.

Fracking, or hydraulic fracturing, is a process of extracting fossil fuels that involves drilling into the ground and pumping in a high-pressure solution that contains water and other chemicals.  This fractures shale in the bedrock, which releases the fuel.

The group is seeking to raise awareness of fracking because of the impending expiration of a fracking moratorium in Maryland on Oct. 1, 2017.

Enacted in 2015, the moratorium barred the state from issuing fracking permits to companies for a two-year period and directed the Maryland Department of the Environment to adopt regulations for the practice in the interim.

Those who support the practice argue that it is an efficient way to access hard-to-reach oil. The BBC reports that an increase in the domestic supply of oil (in-part due to fracking) has contributed to lower gas prices and that the practice is less polluting than coal.

Those opposed to fracking cite environmental concerns ranging from tainted groundwater to earthquakes.

“We’ve heard horror stories of what has happened in Pennsylvania and Ohio [which allow fracking], and we don’t want to bring it here,” Denton said.

Student Julia Shah first became involved in the anti-fracking movement through the application process for a state delegate-sponsored scholarship.

She was shocked to see that the practice could “make land uninhabitable, contaminate local water, cause earthquakes and cause lots of different health issues.”

Her research turned her into an advocate, and she has become passionate about the issue.

Citing her roots in Southern Maryland with access to the Patuxent River and Chesapeake Bay, Denton explained that water means a lot to her, and protecting and preserving these ecosystems are why she is passionate about banning fracking.

Shah expressed concern about the validity of the regulations developed during the moratorium.

“Even though Governor Hogan has set up regulations,” she argues, other states have seen contamination and earthquakes despite similar safeguards.

The group will send the collected signatures to each respondent’s legislator to show that their constituents are against fracking.

“Right now is the time to speak up because time is coming up for them to make a decision,” Denton said.