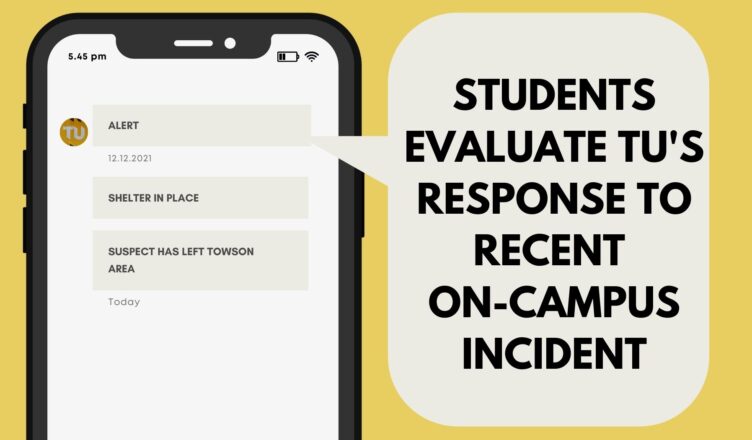 Exactly one month after the Sept. 4 shooting on Towson University’s (TU) campus, which caused widespread policing changes to the University, another incident occurred with a possibly armed suspect running loose around campus.

Sophomore Mikayla Mellis got back to her dorm in Tower A when she looked out the window and saw a helicopter and flashing lights outside her window. She recalls herself and her friends being confused by the sudden police presence across campus. At this time, there had been no communication to students regarding the situation.

As of now, the University has an opt-in text alert system which anyone can opt-in to to receive communications from the University and the Office of Public Safety in a timely manner. The University continues to contact its members via email, which can not be opted-out of.

“There was about 15-20 minutes in between me seeing police cars at 5:28 p.m. and Towson’s first email alert sent at 5:49 p.m.,” Mellis said. “I would say there is a significant delay in communication between the University and students.”

TU sent out an emergency text on Monday, Oct. 4 at 5:49 p.m. notifying the campus of a possibly armed person in the West Village and University Village (a nearby, off-campus apartment complex) area. At 6:04 p.m. they followed up with a shelter in place order.

“While I understand we are all human and things take time, in high risk situations like this, any type of alert is better than nothing at all,” Mellis said.

The response time and lack of communication between an event occurring and TU’s alert system has students concerned.

Brandon Rytina was in class when the alerts started to appear. His class paused for ten minutes while they turned the lights off and locked the doors. Rytina says that his professor kept the class updated.

“I think [Towson] could definitely do a better job at getting out the alerts faster,” sophomore Brandon Rytina said. “My email was very late, very delayed.”

Mellis tuned in to a police scanner for the entirety of the incident, which is where she says she got most of her information. Before hearing from the University again, Mellis was able to gather more precise locations as to where the suspect was seen and that the suspect had ultimately stolen a vehicle and fled the Towson area.

The Towerlight released sightings and reports submitted by students via our social media accounts regarding the incident in live time. Tweets that detail this series of events can be found on our page, @thetowerlight.

TU’s Police Department (TUPD) sent out an email at 6:37 p.m. confirming the person was ultimately identified as unarmed. At 6:41 p.m. a text was sent saying that the subject had left the area, and ten minutes later a text and email was sent out saying the subject had been apprehended in Baltimore City.

While some students felt that Towson could have done a better job at communicating with students about what was going on, others think that Towson did a good job. Avigyle Heyman, Kailey Schnirel and Raz Mohammed Salih did not have a problem with Towson’s communication with students.

“I feel like Towson did a good job at expressing [the situation],” said Heyman. Mohammed Salih and Schnirel both agreed with her.
TU is encouraging everyone to sign up for text alerts. To sign up, visit their website.