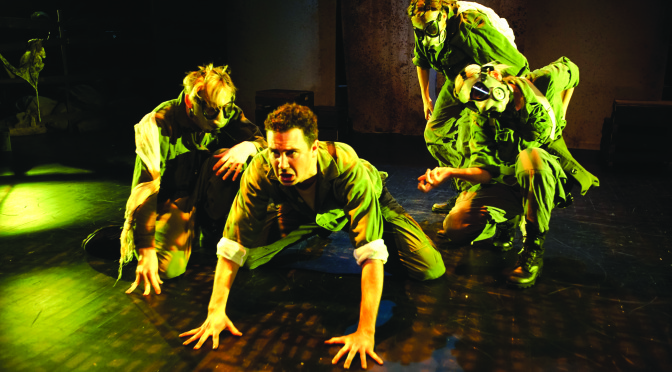 “The Trench,” a student-directed play set during World War I, explores the struggles of a soldier as he deals with the pain of being away from his family and the difficult life in the trenches.

Director Bridget Lindsay, along with close friend and stage manager Billy Goheen, first saw the play performed years ago at their high school.

“It really struck me and sat with me for a while,” Lindsay said. “The message is so universal and powerful. Anyone can identify with it. I felt like this was the time and place for it to be told.”

Performed from Nov. 2 to Nov. 5 in the Ruth Marder Studio Theatre inside the Center for the Arts, the show began with evocative imagery of soldiers lying still on the ground against a foggy set of torn and bloody canvases and a band playing mellow music in the corner.

When the lights dimmed and the music stopped, the soldiers stood up and began to tell the audience with poetic vigor about the hard life of a soldier and introduced the main character, Bert, played by Rusty Hrabe, a young man who worked hard to be accepted into the army and left behind a pregnant wife. He befriends a young soldier named Collins, played by Tim Neil, and together they venture through the hardships of war.

Everything takes a turn for the worse when Bert receives a letter from home that says his wife died in childbirth and bombs start going off in the trenches, leaving everyone dead but him. Then, he’s approached by a demon to take on three quests to cope with his loss and the person he has become during the war.

“For the play itself the best part was being in a piece about human experiences,” Neil said. “The cost of war is too great to comprehend, and the cost of life can’t be overstated.”

Originally written as an epic poem by Oliver Lansley, it was transformed into a theater production with the actors reciting the original poem to go with the acting. According to Lindsay, the entire process of putting together the play was a creative one. All of the action was actor-generated through activities, exercises and brainstorming.

“I loved watching the show from start to finish,” Goheen said. “It was just an idea on the first day. We were seeing how much we could get to work and from there and watch it grow. The best part for me was working closely with the production team and seeing it come to life.”

Audiences appreciated how much work was put into the play, from memorizing all of the lines of Lansley’s poem to the dynamic work with the set.

“It was really impressive,” sophomore family studies major Rachel Sklar said. “There were a lot of words. It was 45 minutes of non-stop speaking. There was a solid set with lots of pieces moving around. They did a lot with a little.”

At its heart, “The Trench” is a story that everyone can relate to.

“I would like people to take away that everyone has their own story,” Lindsay said. “There is always a light at the end of the tunnel. As long as you press forward, you’ll find your purpose.”