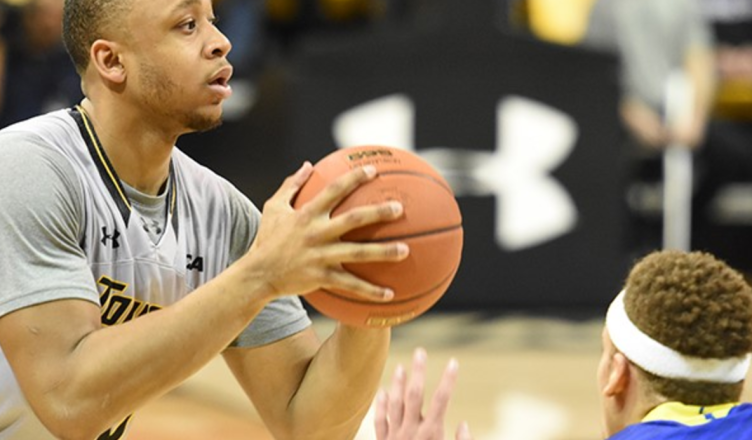 Ahead of Towson’s Thursday night matchup against conference rival Elon, head coach Pat Skerry announced that senior forward John Davis will be out for the remainder of the season.

“His health is fine,” Skerry said. “He’ll be able to play next year overseas, but he won’t play the rest of this season.”

Davis was shot with a “graze wound” to his knee after an apparent drive-by shooting outside of his South Philadelphia neighborhood Saturday, according to police information.

According to that same communication from police, Davis was stabilized and transported to a second hospital.

According to Skerry, Davis, 22, remained in Philadelphia after Towson’s 69-65 victory over Drexel to attend a dedication ceremony for the birth of his son when a car drove by his family home and opened fire. The investigation remains ongoing.

Skerry said that he talked to Davis this morning and that he is doing well. “He told me, ‘coach I feel really blessed. It could have been a lot worse.’”

According to Skerry, Davis is back in Towson and will be at the game against Elon. Skerry also said that Davis will be in attendance on senior day against James Madison.

“He will be with us moving forward,” Skerry said. “He is going to be sitting right next to me on the bench, I need all the help I can get and I’m looking forward to John’s expertise.”

John is one of four children in the Davis family. He was born and raised in Philadelphia and  attended high school at Ss. Neumann Goretti.

At Ss. Neumann Goretti, Davis was co-captain of his team during his senior year. That season, the Saints went 28-3 while he averaged 12.9 points per-game and nearly 11 rebounds.

In 2013, Davis came to Towson as a freshman where he played in 24 games and ranked sixth in Colonial Athletic Association rookies in rebounding, averaging 2.8 boards per-game.

The following season, Davis was named Third-Team All-CAA and in 2015 was just one of four Tigers who averaged double figures in points per-game.

This year, Davis has appeared in 27 games. He is averaging 11.8 points per-game and shooting 52 percent from the field.

“He’s given so much to Towson as a student athlete,” Skerry said. “He’s done a lot more for us than we have done for him. He came here we were 1-31 and had an APR ban and if we can win one more game he ties the record for the school’s winningest all-time player in Division I. If we win two he sets it so he means a lot to the program.”

-Cody Boteler contributed to this report.