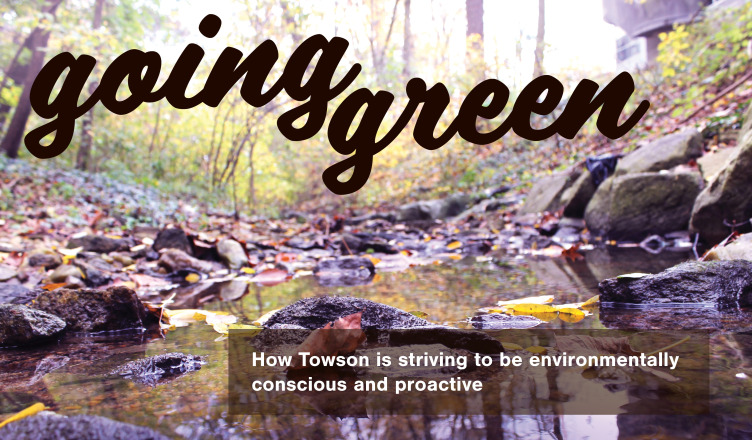 Towson University may be home to the black and gold, but in recent years it has taken steps to become a more “green” campus.

TU President Kim Schatzel said the University is always looking for new ways to become a more sustainable and environmentally friendly institution, simply because “it’s the right thing to do.”

Schatzel said that Towson has a responsibility to the members of its own campus as well as the broader community to create a more sustainable future.

The Environmental State of the University

“The goal is to reach zero emissions by 2050, and we are well on our way,” said Campus Planning and Sustainability Manager Paddy Watson. “Towson University has reduced its carbon footprint over 40 percent from the 2008 baseline year.”

Watson said the University’s next milestone is to reduce emissions 50 percent by 2030.

“Even though we are currently on track to meet this goal early, we still have to take into account the growing campus population and size,” she said.

Towson installed solar panels on the roofs of the University Union, Union Garage, the General Services building, and Douglass and Barton houses.

According to Watson, Towson’s solar panels can produce about 8 percent of the total energy needs of the campus on a sunny day.

A study will be completed in 2018 to evaluate the viability of expanding solar panels on campus, Watson said.

The Push for “Green” Menstrual Products

As Towson looks toward its future as an environmentally-friendly campus, students are also examining the ways in which they can have a “green” impact.

Gabriela Garcia, a member of the Student Environmental Organization at Towson, hopes to spread awareness about the harms of disposable feminine care products by educating students about “green” alternatives like menstrual cups and reusable pads.

“A lot of tampons end up in waterways because women flush them down the toilet instead of throwing them in the trash,” she said. “And then it clogs the sewer system, the pipes, and that leads to more problems.”

Menstrual cups are small flexible cups that are typically made of medical grade silicone. Users fold the cup and place it their vagina where it unfolds to collect the person’s menstrual flow.

Gretchen said that raising awareness for menstrual cups would not only be environmentally beneficial for Towson, but also worldwide.

“I think even on a bigger scale, it’s definitely exciting to get people interested in it because it is a great alternative for women in developing countries,” she said. “Because instead where women are getting their periods, a lot of them can’t go to school anymore because it’s too much of an inconvenience. So it’s not just about the students on campus, but it’s about it being a global movement to encourage menstrual cups.”

Gretchen said that in addition to educating students, she and the rest of SEO would also like to see the University Store carry menstrual cups.

“It might not be for everybody, but I think everybody should definitely have the opportunity to at least see it,” she said. “So if they see the menstrual cup, or they see and are able to touch and see how it’s used, they might be a little more receptive to actually buying one for themselves.”

The Expansion of Composting

SEO secretary Daija Odom is working on a proposal to get composting in all 16 residence halls at Towson.

“The reason for doing it is just because of all the apartment-style residence halls that are on campus,” Odom said. “The one that I live in, which is Marshall, a lot of the food waste gets thrown away. [Students are] not going to take it to a dining hall because that’s kind of weird. So it just helps Towson out and the community.”

The university collected 22.72 tons of compost in September, which is the third highest monthly total since the start of the program in 2010, according to Watson.

Compost is currently being collected in Douglass as part of an Honors College effort. Composting is also being collected in a few offices, including the audiology department, the Office of Civic Engagement and Social Responsibility, and Facilities Management, according to Watson.

“While composting isn’t available in every building, recycling bins are readily accessible,” she said. “There are over 8,000 recycling bins conveniently placed on campus, so be sure to recycle your bottles, cans, clean paper and cardboard.”

During that period, Watson said it was estimated that students in suites diverted on average 1.5 pounds of food waste per week, and in apartment style situations roughly three pounds per week.  Those figures scale up to an additional 160 tons of compostable materials per academic year if every student participated.

While she would like to see composting at Towson increase, Watson said it is important to first educate people about proper composting habits.

“There are limited locations to send compost in the state of Maryland,” she said. “Therefore it’s extremely important the compost stream stays clean otherwise the entire program could be jeopardized.”

Watson said that Towson will expand its composting opportunities in spring 2018.

“This spring we are planning on expanding compost collection to all residences halls, so that students who want the opportunity will have access,” she said.

According to Odom, there would be one bin in each residence hall where students could dump their compostable materials.

A student volunteer in the residence hall would then be responsible for emptying the bin daily and taking the bin’s contents to a compost dumpster on campus.

Odom said the composting effort could help students to be more environmentally conscious and responsible for their food waste.

“It’s going to be student-run so it’s not the responsibility of ABM, who deals with taking all the trash out,” she said.

Towson is still on its way to becoming fully carbon neutral, but its ongoing environmental initiatives could be a step in the right direction toward being a “green” University.

While students are taking up their own campus-wide sustainability efforts, Gretchen also acknowledged that the pathway to environmental change can start with one small step.

Whether it’s carrying a reusable water bottle, or participating in the Towson Run stream cleanup on Nov. 10, students can look for ways they can be a little friendlier towards the planet everyone calls home.