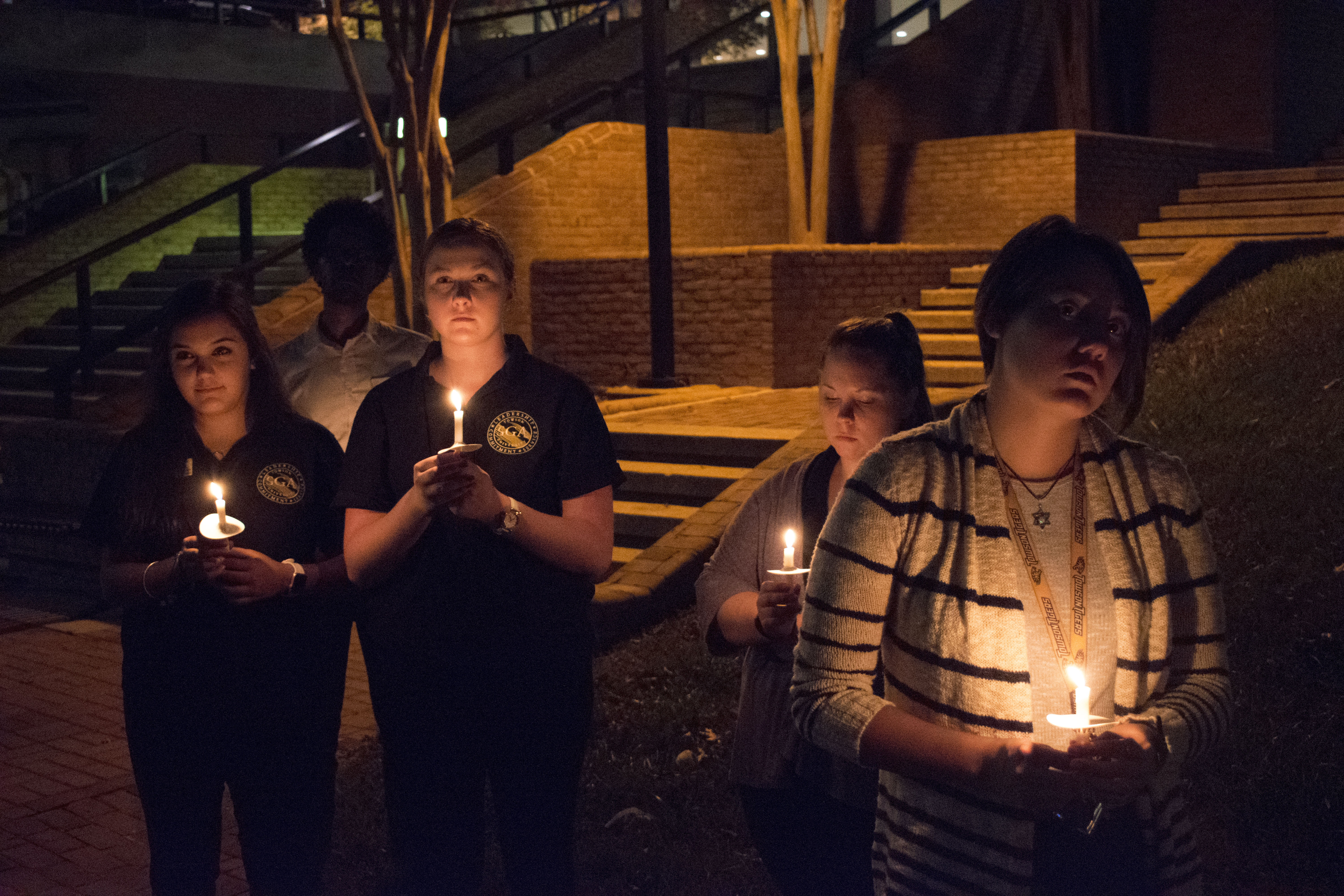 Towson students, faculty and staff gathered at Speakers Circle on Oct. 10 for a candlelight vigil to mourn the lives of those who were killed in the mass shooting in Las Vegas, Nevada.

On the night of Oct. 1, gunman Stephen Paddock killed 58 and injured 546 people after shooting into a crowd of concertgoers during the “Route 91 Harvest” country music festival in Las Vegas.

Members of the Student Government Association and workers from the Department of Civic Engagement and Social Responsibility hosted the vigil and handed candles to students who came out to show their support.

“We wanted to provide a space for peace and reflection,” said Luis Sierra, assistant director for Civic Engagement. “Towson students need to continue to stand up for what’s right, and continue to search for what we can do to make the world better for one another.”

The students held their candles, bowed their heads in silence, and reflected on the shootings and violence the United States has endured.

Speakers took to the stage to express their concern for the country and discuss ways Towson could help.

“We wanted to get TU involved to recognize that the attack in Vegas was a terrible tragedy,” SGA Director of Civic Engagement Christian Pineiro said. “There could be hundreds on campus who have connections to anyone who attended that concert and even if you don’t have any connections, it’s still important for people to know we care.”

SGA Director of Health and Wellness Rachel Chang said they wanted to raise awareness around campus to not judge the Las Vegas mass shooting as “just another shooting.”

Sophomore mass communication major Rachel Veslany emphasized the significance of Towson demonstrating solidarity with the victims of the attack.

“It is important for TU to come together to show support as a community for everyone and to show inclusion for every different ethnicity, race, and gender,” Veslany said. “The victims were just there for a concert and to have fun but lost their lives instead.”

Sophomore McKenna Bondura, an early childhood education major described the shooting as the elephant in the room and something that isn’t typically discussed among in the classroom.

SGA President James Mileo described the Vegas shooting as traumatic, evil, an act of terror, and an effort to instill fear into society.

“We are starting to see the national government recede into violent narratives and we need to be more thoughtful about what we are putting into the world and how we are going to impact the lives we touch every day,” Mileo said. “You need to let events like this give you a voice to make a change and make a difference.”

Mileo listed a few ways in which Towson students can respond to the tragedy in Vegas.

He said TU can advocate for stricter gun control laws, advocate for those that were injured, and try to create change and find a solution.

Before giving the microphone to Provost and Executive Vice President for Academic Affairs Timothy Chandler, Mileo told the students in attendance to fill the atmosphere with love and requested a moment of silence.

Chandler described Towson as a community in search for peace and harmony for others and to get stronger, we need to reflect on our differences.

“The Vegas shooting was nothing short of a tragedy and it has left us with more questions than answers on what caused it,” Chandler said. “But, it is about how we respond to life’s trials. We responded the right way, with intellectual conversation and debate as well as getting here together to support those who are grieving and have lost loved ones.”

Chandler expressed his gratitude to the students in attendance and requested another moment of silence.

“I think it’s important to show everyone we should show support and speak out and not stay quiet to create solutions,” said sophomore Beza Tenna, an international studies major.