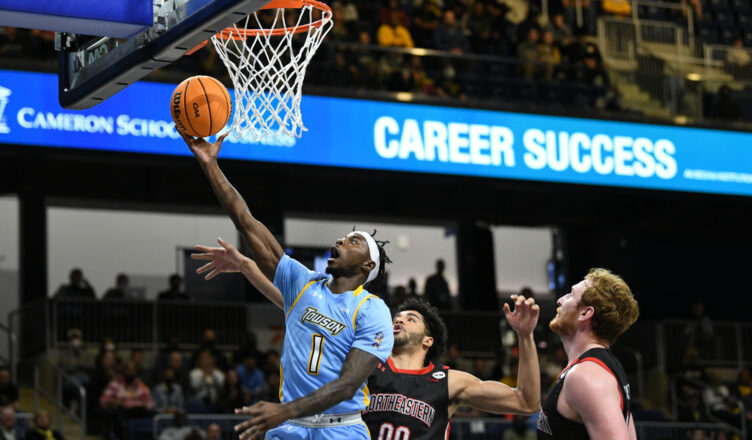 “Great win for our guys and our program, and really excited about the turnout of the Towson faithful,” Head coach Pat Skerry said. “…Hard fought game, Northeastern’s incredibly well-coached. We knew it was gonna be a hard game, they got good veteran players. I thought the difference in the game, you could see why these guys are first-team all-league players. They carried us tonight.”

The Tigers struggled to hit shots early, going 0-7 from beyond the arc and 3-14 overall through the first 10 minutes. Meanwhile Northeastern (NU) went on a 12-0 run including two layups from redshirt junior forward Chris Doherty.

Unlike many of their games this year, the Tigers were also outrebounded early, with the Huskies holding a 14-9 advantage through the first 11 minutes. Towson found some momentum late in the first half and responded with a 10-0 scoring run in under two minutes.

“New building and everything, it was just a mixture of excitement and just nerves,” said redshirt junior guard Nicolas Timberlake. “Once that first half ended, we calmed down a little bit in the locker room and came out firing in the second half.”

For most of the game, junior forward Charles Thompson dealt with a foot injury. He was seen limping and on the sidelines several times throughout the game. After the game, Skerry said they believe it’s an ankle sprain.

“Charles is a whole different level of toughness, so for him not to be able to finish this is concerning,” Skerry said. “…If there’s a way Charles will go, he’s as tough as they come.”

Senior guard Cam Holden and graduate guard Terry Nolan Jr. each scored five points, and Nolan gave the Tigers their first lead 25-24 off a layup. The Huskies took the lead on a stepback three from graduate guard Nikola Djogo and took their lead into halftime 28-27.

Timberlake opened the second half with eight points, including two threes. He was part of an 11-2 Towson run that gave the Tigers a 38-30 lead. Timberlake hit his fourth three-pointer of the second half to extend their lead to nine.

After Northeastern went on a 6-1 run, graduate forward Juwan Gray finished a putback off an offensive rebound. He was fouled and hit the free throw. A few minutes later, Timberlake hit his fifth three of the second half to extend the lead to 58-49.

“I tried to spark energy into the guys, I kind of caught my hands and wanted to pick up full court to get the guys going,” Holden said .”Once our defense gets going, our offense eventually gonna come around.”

The Huskies continued to take advantage inside with four unanswered scores inside the paint, as they went on a 10-0 run late to cut their deficit to one. The Tigers had several possessions with the shot clock running down and were forced to take tough shots that missed.

After over four minutes without a bucket, junior forward Chase Paar extended Towson’s lead to three with a layup. Holden hit two free throws and Timberlake hit six free throws in the final minute to seal the game. Timberlake led all scorers with 25 points, shooting 5-7 from three and 6-7 from the line.

“These guys, they help me out a lot,” Timberlake said. “I don’t dribble a lot, so to get open and have them find me. If I’m open, I’m shooting it.”

Timberlake, Holden, and Nolan each scored in double figures. Holden finished with 18 points, six rebounds, and six assists and shot 8-9 from the free throw line. Nolan scored 11 points and went 3-5 from deep.

With the win, Skerry surpassed his .500 record as the Tigers head coach at 172-171. A decade prior, Towson finished 30 games under .500. Now the Tigers are two wins away from their first NCAA tournament bid in 31 years.

“It takes a while, I’m glad I get good players,” Skerry said. “First year was a hard year, it’s a long time.  I’m just proud of our university and our players.  I think we have a great place and if we can continue to have success,  I think it can do a lot for our great university.”

Towson will face the University of Delaware on Monday, March 7 at 6 p.m.