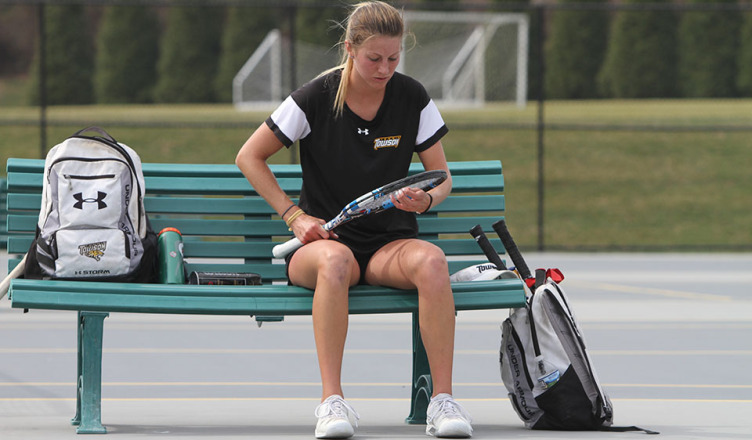 “There were just a lot of circumstances that didn’t go our way,” Interim Head Coach Jamie Peterson said.

Saturday, the Tigers could not make headway against a tough Dukes squad, falling 7-0 at the Hillside Courts in Harrisonburg, Virginia.

James Madison took two of the three doubles flights to seize the opening point of the dual match. The Dukes pairing of Timea Guibe and Kimmy Herrock topped the Tigers No. 1 team of A.J. Gomer and Ren van Oorschodt 6-4, while Jona Roka and Dylan Owens defeated the No. 3 team of Lucy Gloninger and Barbora Vasilkova 6-2.

Towson’s lone set of the entire dual-match came at the No. 2 doubles spot as the team of Lucy Williams and Jane Shusterman beat Emma Petersen and Rebecca Harris 7-5.

“It just wasn’t our day,” Peterson said. “We’re going to try and not dwell on it too much and put it behind us.”

Wednesday, Towson lost its fifth 4-3 match of the season, falling to Delaware by the same scoreline at the Delaware Field House Outdoor Courts in Newark, Delaware.

The Tigers fell behind early as the Blue Hens rallied to win the opening doubles point, which later proved to be the match-deciding point. The Tigers were unable to secure the doubles point in their four previous 4-3 losses this season.

Delaware’s Sarah Hall and Sara Komer defeated No. 2’s Williams and Gloninger 6-3, while Brooke Pilkington and Arielle Shuren beat No. 3’s Shakhnazarova and Shusterman 6-3. Towson’s team of Gomer and van Oorschodt held off Amanda Studnicki and Denny LaMachia 7-5 at the No. 1 doubles flight.

The Tigers held a 3-2 lead with two singles matches still in progress, but the Blue Hens toughed out both of the remaining matches in three sets to clinch the victory.

“The ball hasn’t been falling our way,” Peterson said. “There’s nothing we can do about it except for knowing we’re going to have some close ones here to finish, and try to focus a little bit better and just play the important points a little bit better.”

Following the past week’s matches, Towson stands at a 10-9 record. The losses to James Madison and Delaware drop Towson’s conference record to 2-4.

“The conference is a bit of a big mess,” Peterson said. “If we hadn’t lost those 4-3 matches to Delaware and UNCW, we could have been in position to be in the top four.”

The team heads to Bucknell for a Tuesday afternoon matchup before a three-match homestand to close out the regular season, beginning with Drexel Friday at 1 p.m. and finishing with Navy and Coppin State Saturday at 11 a.m. and 3:30 p.m., respectively.