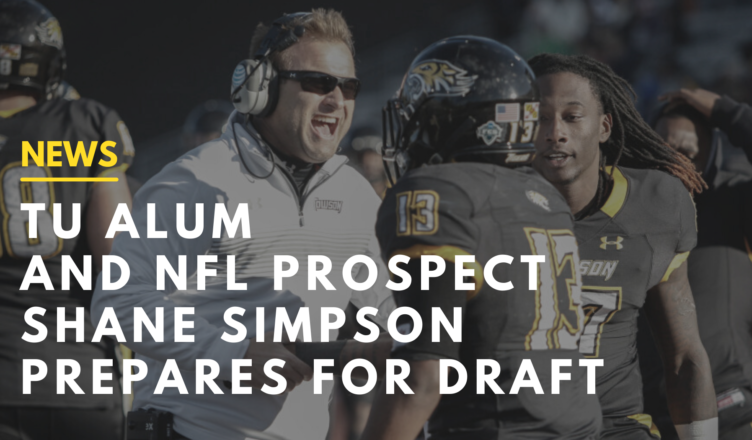 Kaizen. It is the Japanese term for change for the better or continuous improvement. Former Towson University (TU) running back and NFL prospect, Shane Simpson, lives by this mantra, even having the phrase tattooed on his bicep.

Simpson looks to add his name to the list of former Tigers football players to sign with the NFL. He credits former strength coach Jason Brader for teaching him the phrase that helped inspire him both physically and mentally to persevere through tough injuries.

“Now that I look back since my college career is over, I’ve done all I can do,” Simpson said. “I’m doing all the little things to prepare.”

Simpson recently finished his sixth year of eligibility in 2020 as a transfer at the University of Virginia (UVA). At UVA he finished with 278 rushing yards with two rushing touchdowns, 133 receiving yards and a receiving touchdown.

According to Tigers coach Rob Ambrose, he believes Simpson will bring his versatility to an NFL team.

Simpson finished his college career with 2,203 rushing yards and 15 rushing touchdowns. He had over 5000 career all-purpose yards including over 2000 from kick returns.

The Breeze Sports editor, Noah Ziegler, believes that Simpson can bring value in multiple facets of the game.

“I like Shane Simpson’s ability to maintain his speed while making cuts,” Ziegler said. “Another thing is his ability to read the line and wait for his opportunity, you can see a high football IQ whenever he plays.”

Ziegler added that Simpson could be a surprising player with explosive ability if he finds himself on the right team.

After spending a lot of time working with Simpson, Ambrose recounts the memories they share, unable to favor out any single moment.

“One of them? Nah,” Ambrose said. “I have had so many one-on-ones with [Simpson] that I could probably write a book, and it would be a great book.”

While at TU, Simpson was named a first-team FCS All-American in 2018 and named the 2018 CAA Special Teams Player of the Year. He was also selected to the All-Conference team three times.

“Being a spectator and having somewhat to do with the growth of that young man is one of the most enjoyable experiences of my professional career.” Ambrose said.

Simpson has not had an easy journey through his college football career. He battled multiple injuries at TU where he missed significant time in the 2015 and 2019 seasons. Simpson noted that his family were his biggest supporters during those tough times. Ambrose cites Simpson’s tenacity during this time.

Simpson has rehabbed his injuries and is looking to hear his name called on draft day, ready for his next challenge. His goal for his pro day is to show the scouts that there are no lingering injuries and that he can bring value to any NFL team that gives him a chance.

“It’s been a long journey, but it’s definitely going to pay dividends in the end,” Simpson said. “I can’t thank God enough for the opportunities he allowed me to have.”