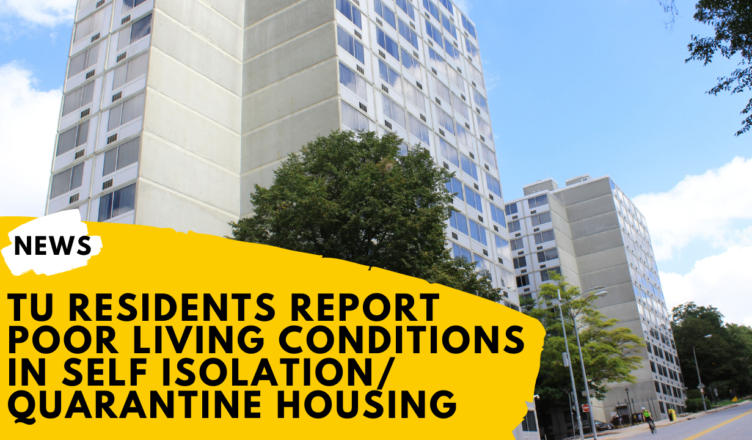 Students temporarily placed in Towson University’s (TU) isolation housing have reported experiencing a number of poor living conditions such as not receiving scheduled food orders and no access to medications.

While living on campus, freshman Lauren Blank was exposed to COVID-19 and sent to Tower D to self-isolate, March 23. She says she did not receive the correct meals despite filling out a meal slip which indicates to staff what food and delivery frequency students have requested.

“The first 2 days I did not receive the right meals,” she said. “I ordered a chicken caesar salad and I got soggy Chinese food and a stale brownie.” Blank also noted that that was the only meal she had received that day despite requesting three meals a day.

Sophomore Andrew Awanda says he requested two meals during the day. Three days into isolation, Awanda only received two meals. Other days staff would deliver food without him asking.

“They forgot to feed me almost every day I ordered food,” Awanda said. “Sometimes it wasn’t even the right meals that I’ve ordered.”

After the second day of isolation, Blank stopped receiving meals altogether. She resorted to ordering food online and having it delivered to the front desk.

Blank also cited surprise over not being provided toiletries and other basic necessities.

“Basically it was like moving into a dorm,” she said. “They didn’t let me know that I wouldn’t have anything, not even sheets, pillows, water or toilet paper.”

Similarly to Blank, freshman Megan Parker was also unaware of the lack of toiletries provided.

“They were completely unprepared and did not supply toilet paper, hand soap, anything,” said Parker, who was sent to Tower C after a positive test in February. “We had no way of knowing to bring that stuff.”

Freshman Claudia Leshinskie also tested positive and stayed in self-isolation in the Glen Complex. Leshinskie had a fever of 102.6 and asked the front desk for Tylenol. However, the staff was unable to provide medicine.

“I had to have my friend go out and buy me medicine because they did not have the resources there to help me,” Leshinskie said. “And considering they are in a building with a bunch of sick people it would make sense to keep some sort of medicine.”

When asked to address the above concerns, Kelly Hoover, Assistant Vice President for Student Affairs, says HRL staff have worked tirelessly to care for students since the beginning of the pandemic.

“We are grateful for our HRL staff, who have worked tirelessly throughout the pandemic to provide comfortable accommodations to our students, including those in quarantine and isolation,” Hoover said. “Many of our staff come to know those in isolation on a first-name basis, not only because of the small number, but also because of the level of care they provide.”

The Towerlight also presented these concerns to The University, to which they recommended that students reach out to HRL or the Office of Public Safety if they have any issues.

“Like many institutions, TU has faced unprecedented challenges during the last year,” the University said. “Towson University prioritizes the wellbeing and safety of its students, staff and faculty. TU’s Housing & Residence Life staff has resolved the issues brought to their attention in a timely manner, many within minutes. Housing & Residence Life is available Monday through Friday from 8 a.m. to 5 p.m. via phone at 410-704-2516, via the live chat feature on Housing & Residential website, or via email at housing@towson.edu. Staff is always on call in the event of an emergency.  Students in isolation and quarantine can be connected to the on-call staff by reaching out to TU Public Safety at 410-704-4444 or publicsafety@towson.edu. ”