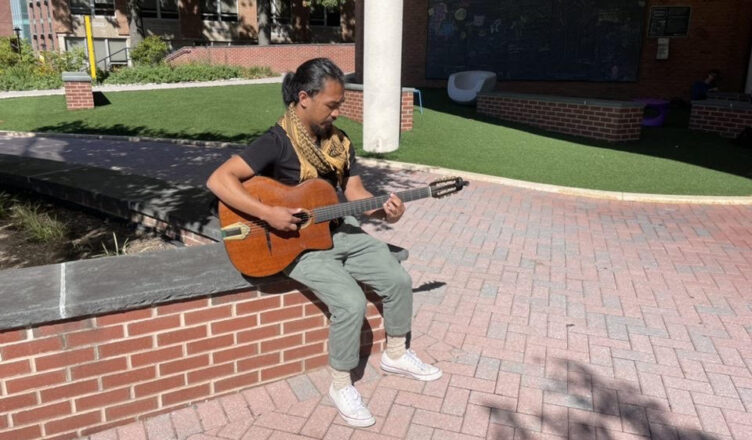 Lately at Towson University (TU), students have been able to be productive in Freedom Square while being immersed by music, thanks to students Kristoffer Belgica and Xavier Donnelly.

On an almost daily basis, the duo will bring their guitar and baglama out and play a variety of songs for students to listen to while in Freedom Square. They have taken the responsibility of making Freedom Square lively and vibrant.

As a pre-music major, Belgica began playing the guitar at the age of 12 after his father gifted him the instrument for Christmas.

“Over time, I started to ‘learn off the streets,’ bringing my guitar everywhere and receiving impromptu lessons from musicians way better than me,” Beglica said. “That’s when I’d say I really started playing guitar.”

Beglica considers himself to be a versatile artist. He said he plays mainly jazz and early swing, but also loves playing world music such as Yiddish folkslider, Greek Rebetiko, and Brazilian Choro. He fell in love with music in high school, where he first started listening to Jazz.

“When my best friend introduced me to the music of legendary Belgian-Romani guitarist Django Reinhardt, it changed my life. It was all that I really wanted to listen to,” he said. “At 22, I met members of the jazz community in Baltimore. I spent many nights going to the city to catch a show or attend a jam session and make contacts with these musicians.”

Donnelly is a linguistics major, who plays the baglama, a Turkish folk instrument.

“I’ve been really playing all this stuff my whole life, but I picked up the baglama last year,” he said. “The style of playing is very translatable and the rules of the fingerboard are more or less similar.”

According to Donnelly, he doesn’t fit into one type of genre.

“I don’t know what kind of artist I consider myself, I just appreciate all kinds of art, and incorporate my style and myself into all different styles of art.”

Donnelly was attracted to music from personally adjusting different songs.

“I played those songs that needed something in my head, and then added to it, and made it sound better, and that’s when I fell in love with music,” Donnelly said. “Any type of way the musician plays it, the audience will feel the same way because it resonates so powerfully.”

Donnelly enjoys the prospect of playing in front of a crowd.

“Oh man, people and just musicians here in Towson, I find them to be such awesome people, and I love to just come and jam out with them,” Donnelly said. “You can learn a lot from someone, just from playing around.”

Belgica looks forward to inspiring students with the music he plays.

“If I can make someone smile or make someone’s day through music, I will do it every day as long as I’m able,” he said. “Some students who have never sang or played publicly have joined in on the music-making. It’s a very communal experience and I want to help facilitate in growing networks and friendships.”

TU student Julia Zelnosky appreciates the performances that Donnelly and Belgica put on in Freedom Square.

“My favorite thing is seeing how happy everyone looks when they come out to play. You can just see the enjoyment on people’s faces listening to them play and nodding along with the music.”