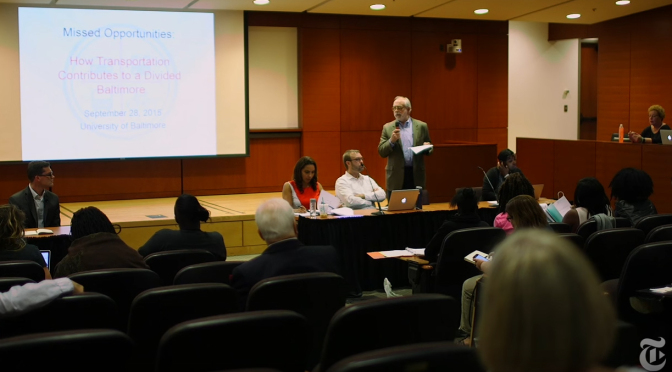 University of Baltimore professor Joseph Wood described the origins of racial divisions and structural segregation in the city Friday, during a presentation modeled after one of his UB courses, “Teaching Divided Baltimore.”

“I can tell you when I first started teaching many decades ago, I certainly wouldn’t talk about race in class because I didn’t know how to support such a conversation and I didn’t want to offend anybody,” Wood said. “But in fact, we have to offend one another to have the conversation. A winning Donald Trump is a great thing because it’ll generate a lot of difficult conversation. I keep looking for the silver lining.”

Explaining how Baltimore became structurally segregated, Wood told the audience that by 1860, 12 percent of the Baltimore population was made up of free African-Americans.

In the 19th Century, the city was micro-segregated by the races being divided by streets and alleys. Wood explained, however, that segregation comes in other forms other than just geographic, including through practices such as setting curfews and giving fewer employment opportunities to African-Americans. Wood shared that in 1910,  Baltimore created a Municipal Ordinance, which restricted where either race could live, not allowing either race to live in the other race’s neighborhood.

This ordinance was overturned seven years later, but the races were still very much divided, according to Wood. Between World Wars I and II, most African-Americans were confined to certain neighborhoods, and in the 1950s, white people led the trend of suburbanization.

Wood indicated that there is a “pattern of residential segregation” still today.

At UB, Wood teaches a course developed after the April 2015 civil unrest in Baltimore following the death of Freddie Gray.

The goal for the course is to “engage students and community members in understanding how Baltimore became segregated; what segregation means for people who live and work in Baltimore; and what can be done about it,” according to Wood.