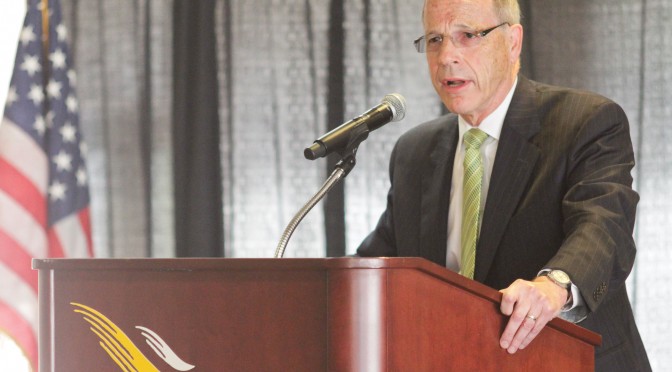 Towson University Provost Tim Chandler says that he’s glad to be back to work in the provost’s office following a yearlong stint as the university’s interim president.

“I think for now I am looking forward to coming back and working [as provost],” he said. “I’m looking forward to getting back to doing these things in this office, which to me are more meaningful and more satisfying, and then I’ll think about [the future]. It’s hard work being the president.”

Chandler, who came to Towson in January 2013, rose from provost to acting president in August 2014 when the late President Emerita Maravene Loeschke announced that she would take a leave of absence due to health reasons. He became interim president when Loeschke officially resigned that December, and announced in April 2015 that he had entered his name for consideration for the presidency.

When University System of Maryland President Bob Caret announced Schatzel’s appointment Dec. 4, he also announced that Chandler would return to his role as provost and vice president for academic affairs. Chandler and Schatzel officially began acting in their positions Monday.

“I work harder in this role, but I work a whole long longer [as interim president]. Long, long days,” Chandler said. “There is no weekend, it’s just another day. It was a great learning experience and it helps you understand that this is a 24/7 operation.“
He said that with the academic year and state legislature already in session, Schatzel has been thrust into the deep end, where she’ll get a taste of those long days.

“It sounds as if there is going to be a lot going on in Annapolis relating to education in general, particular K-12, but also higher [education],” he said. “And so that is going to be a learning curve for her there. I know she wants to get to know campus, so I think she’s going to have to work some fairly long, long days early on just to try and become part of the community and get a feel for the community.”

During his term as interim president, Chandler repeatedly advocated on and off-campus for the construction of new a science building to replace the aging Smith Hall. This project could become a reality, following Gov. Larry Hogan’s inclusion of $162.8 million in funding for the building in his budget proposal for 2017.

“I think, from what I hear, we have a reasonable chance of getting the science building on track,” Chandler said. “That’ll save her trying to go do battle with that.”

Hogan’s budget is subject to revisions and votes before anything becomes final.

Last semester, while still interim president, Chandler also signed a list of demands presented to him by concerned black students following a nine-hour sit-in protest in his office.

Acting as interim president allowed him to see student, faculty and administrator perspectives differently and helped him get a “better handle on the administration and finance of the institution as a whole,” Chandler said.

“I think I have, I hope I have, a greater appreciation for the joys and perils of my fellow vice presidents,” he said. “I have a better understanding I think of their worlds and how they contribute to the overall well being to the place.

Going forward, Chandler said that his top priorities are implementing a broader view of who is qualified to be a faculty member, and trying to grow TU’s graduate programs and means of continuing education.

“Shaking hands with legislators, yeah it’s okay,” Chandler said. “Someone’s got to do it and it’s important and I’ll continue to do it. But I’ll get a lot more pleasure hiring a more diverse faculty, looking at trying to improve the quality of the academic experience and the educational experience for our students, and providing opportunities for them to grow in ways that will enrich their lives long term.”

What he said he’ll miss most about his stint as interim president is, however, something rather private.
“Having my own bathroom,” Chandler said. “Seriously, that’s the only thing I worry about.” 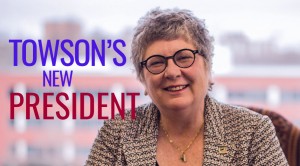