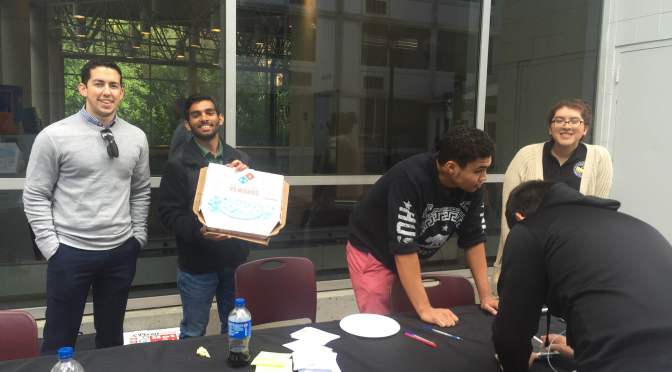 In preparation for Election Day on Nov. 8 and in recognition of this year’s tumultuous presidential election, Towson’s Department of Civic Engagement and Leadership collaborated with student organizations to host Tiger Registration Day.

The  Oct. 11 and 12 registration days involved tabling in both Freedom Square and the Glen Complex, where students could use a program called TurboVote to get registered.

Tuesday, Oct. 18, is the last day to register to vote in Maryland.

According to Coordinator of Civic Engagement Kevin Albano, the idea behind the registration push originated with Towson’s College Democrats President Matt Teitelbaum, now a Towerlight political columnist, who worked in conjunction with campus Republicans, the Student Government Association and Civic Engagement and Leadership on a similar event last year.

“This year we basically built it off of his template of having pizza and other giveaways for everyone who registers, and students who are members of student organizations that require volunteer hours can get their hours here,” Albano said.

Albano also gave a demonstration of the TurboVote system at a SAGE event after the first day of registration wrapped up. SAGE stands for “Students Achieve Goals through Education” and is made to help culturally diverse students excel in their college career.

Usjid Hameed, a student who works in the Office of Civic Engagement and Leadership said that Albano approached him about doing the “registration rush” to help students get absentee ballots if needed.

“TurboVote is an online service that does three main things – registering students to vote, updating their information, and sending students reminders and notifications about the upcoming election,” Hameed said.

“We had a lot of collaboration with Civic Engagement and both College Democrats and Republicans,” McGlyn said. “It’s really been a team effort, and everyone’s been really helpful getting this together; between getting volunteers and advertising, all of the help was really needed and invaluable.”

Students from multiple organizations came out to man the tables and help their peers register to vote. Some, like Shacole Holt, another member of Civic Engagement and Leadership, stressed the importance of having one’s vote matter.

“To have the ability to vote is very important, so it should be used, to make your voice heard is so important,” Holt said. “We’re young and not exactly represented in the government. Especially in this election, we need to be active in choosing what our next four years will look like.”