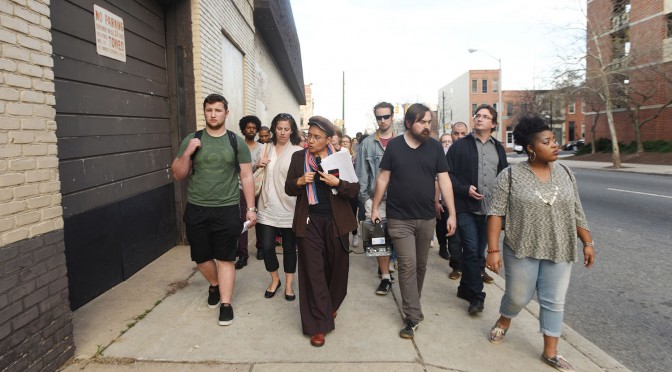 Author and Baltimore community activist Marisela Gomez walks as she talks, guiding a group of Towson students and faculty through Middle East, Baltimore and the predominantly black, low income neighborhoods surrounding Johns Hopkins Hospital. She points out what Hopkins owns, what it doesn’t and what it could own soon. The line, she said, between what is Hopkins’ and what is not, is marked.

And the water on one side isn’t safe to drink, she said.

“A lot of this discussion today, and I think right now where you’re at, is about the people who have the money, have access to the land,” Gomez said. “And so basically, who has the right to the city? That’s not just a 2000s movement. The right to the city has never been for poor and people of color in America.”

Gomez and other local activists explored this question of who has a right to the city Friday, March 11, as part of a bus trip organized by sociology, anthropology and criminal justice department faculty that would allow students to witness and document the efforts of community leaders to assert their right to live and work in Baltimore.

Gomez focused on the outward expansion of Hopkins’ campus and its effect on neighboring low income and typically black communities.  She said that since the beginning, Hopkins has expanded its campus with little regard to the surrounding neighborhoods’ inhabitants, and that many residents were forced out of their homes by the institution. Gomez said that this illustrates a problematic American history of mistreating low income and nonwhite communities.

“If you understand the relationship between Hopkins and this community, you basically understand America,” Gomez said.

She said that the right to the city has always been “resourced to the rich.”

Other stops on the tour included a small park beside the Curtis Bay recreation center, located in industrialized South Baltimore, where local activist and Towson student Destiny Watford described the work of Free Your Voice, a student-led human rights committee working with United Workers. The two groups aim to prevent the development of the nation’s largest trash-burning incinerator less than a mile from Benjamin Franklin High School, where Free Your Voice is based, and Curtis Bay Elementary School.

Watford said that the incinerator, proposed by waste management corporation Energy Answers in 2009, would release 240 pounds of mercury into the air around Curtis Bay per year. The area is already struggling with afflictions like heart disease, respiratory problems and a history of being used as the city’s dumping ground, according to Watford.

According to a 2012 air quality report from the Environmental Integrity Project, in 2010 the Curtis Bay zip code ranked 74th in the nation for highest quantity of toxic air pollutants released by stationary facilities. In the five years prior, the area ranked within the country’s top ten and twice claimed the number one spot.

Free Your Voice also takes issue with the procedures behind the project’s legality. According to the group’s website, there is a Maryland state law that prohibits the construction of incinerators so close to a school. They also argue that Energy Answers failed to meet conditions within their permit for the space. On March 17, the Baltimore Brew reported that the Maryland Department of the Environment declared the incinerator permit invalid.

Free Your Voice and United Workers have also brainstormed alternative uses for the 93-acre lot. These alternatives include building a solar farm, paper mill or other environmentally-friendly facility on the premises, because the incinerator trash would be imported from areas besides Baltimore.

“The incinerator,” Watford said, “wouldn’t even be addressing a problem Baltimore has.”

At another stop on the tour, Right to Housing Alliance representative Jessica Lewis spoke about the mistreatment of low income families in rent court.

According to Right to Housing Alliance literature passed out during the trip, 150,000 Baltimore families per year struggle to afford safe housing. Lewis described the ways by which renters are mistreated in court. They are routinely diverted from defending themselves in court and rendered unaware of their rights.

“Renters come in expecting to get justice and what they get is peeled off at every point,” Lewis said.

According to Lewis, landlords tend to file lawsuits against renters one day after rent is due, leaving tenants without legal representation and proper notice of trials and hearings. When they do get to court, 73 percent of renters don’t know that they have the right to bring up poor housing conditions and get reduced rent for unsuitable facilities.

The bus tour was sponsored by the Center for Student Diversity, Provost’s Office, College of Liberal Arts Dean’s Office and the Office of Civic Engagement and Leadership in addition to anthropology, sociology and criminal justice department faculty. The trip was developed as part of the anthropology department’s overarching urban, race-based thematic, rooted in assistant professor Nicole Fabricant’s “Life in the City” course.

Between stops, Red Emma’s representatives John Duda And Kate Khatib gave background information and encouraged students to think critically about what they heard during the trip. Red Emma’s is a workers cooperative that manages a bookstore, cafe and vegetarian restaurant in Baltimore City. As a cooperative, each worker owns an equal share of the business, giving everyone an equal voice in making decisions.

Red Emma’s mission includes creating “jobs with dignity,” demonstrating that institutions can operate on ideas of sustainability and democratic management and building a resource for social justice movements in the city.
“I’ve never seen a city as resilient as Baltimore,” Khatib said.