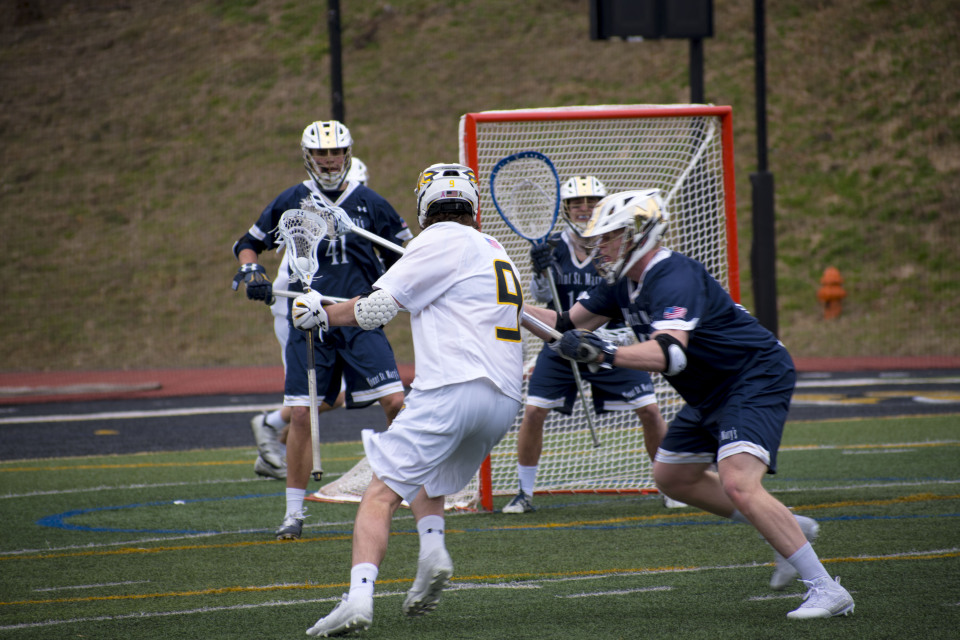 “It was good to see quite a bit of [mental fortitude] show today,” Head Coach Shawn Nadelen said. “It’s something we’ve been lacking in the early part of the season, and we’ve been communicating and working on it as a team. The guys looked engaged.”

Junior midfielder Jon Mazza got things started early for the Tigers (3-3), scoring the first goal of the game six minutes into play to give his team a 1-0 lead over the Buckeyes (5-2).

That score got the offense going, as fellow junior midfielder Grant Maloof scored on a man-up opportunity off a pass from redshirt senior attacker Jean-Luc Chetner just five minutes later.

Junior midfielder Zach Goodrich capped off the hot start for Towson, ripping in a goal off a feed from junior attacker Timmy Mohanan two minutes later.

The Buckeyes managed to squeeze in a goal in the waning minutes of the first quarter, but the Tigers held a 3-1 lead going into the second.

Ohio State cranked up its intensity in the next period, keeping the pressure on Towson’s defense with a flurry of consecutive shot attempts. The home team cut the deficit to one with five minutes left before the half, and knotted up the score 3-3 on a man-up opportunity after freshman long stick midfielder Koby Smith was called for slashing.

The Buckeyes captured their first lead of the game just 33 seconds before halftime as sophomore attacker Tre Leclaire put in an unassisted goal to give his team a 4-3 advantage going into the break.

Ohio State remained aggressive coming out of halftime as the team attempted five shots within the first six minutes of the third quarter. The home team dominated possession in the second and third quarters, taking 25 shots in those periods, while Towson only mustered two shot attempts in that time frame.

Turnovers primarily caused this discrepancy as the Tigers committed eight turnovers in those two quarters while the Buckeyes only committed two. Despite keeping their foot on the gas, the Buckeyes struggled to get the ball past redshirt freshman goalkeeper Shane Brennan.

“They had the ball a lot and we didn’t do a good job facing off, but Shane was able to bail us out,” Nadelen said. “He had a lot of really good saves. Overall the defense played really well, but Shane had his best day so far in his young career. That was a big reason for our success.”

Ohio State finally converted on a shot when junior attacker Gale Thorpe put in an unassisted goal for the only score of the quarter, giving his team a 5-3 lead going into the fourth.

Towson got in rhythm offensively to kick off the final period as Chetner and Smith each put in one unassisted goal to tie the game 5-5.

Both teams exchanged failed shot attempts for most of the period, but the Buckeyes regained the lead with three minutes to go as junior attacker Jack Jasinski ripped the back of the cage on an unassisted score.

The home team had an opportunity to seal the win with another goal, but Brennan came through with a crucial save with just over two minutes left to go. As Towson pushed the ball down on offense, sophomore defender John Henrick was penalized for an illegal body check, giving the visitors a man-up opportunity.

Maloof capitalized on the advantage, as he put in a goal off a timely feed from Chetner to send the game into overtime.The Buckeyes got first possession in overtime, but turned the ball over with 1:36 left to play. The Tigers converted on their only possession of the period in dramatic fashion as Mazza put in a goal with seven seconds left to secure the win.

“He’s our leader on the offense,” Nadelen said. “He’s the guy with the most experience. We need him to be a factor in every game. We look to him for that. It’s important for him to be engaged and lead whether that’s by point production or just organizing the guys. Getting that big game winner was huge so I’m really proud of Jon and the way he’s helping this team be successful.”

Towson looks to build upon the momentum from this win as the team returns to Johnny Unitas Stadium Saturday to host Duke. Game time is set for noon.

“We’re still trying to figure out what we’re made of, but this [win] shows a little bit more of our true colors” Nadelen said. “The guys understand that a good week of practice with everybody engaged and playing hard against each other puts us in position to be prepared and ready to play on game day.”

Previous post Gun control is for all in the U.S.