“This was a big series to win,” sophomore third baseman Daria Edwards said. “But we still need to keep taking series from teams to be where we want to be.”

Elon took an early 2-0 lead over Towson in the first inning after an error allowed sophomore centerfielder Kara Shutt and senior right fielder Emily Cameron to score. However, the Tigers scored three runs in the bottom of the second inning to take a 3-2 lead over the Phoenix.

In the bottom of the third inning, Towson took a 5-2 lead over Elon on a two-RBI single from freshman designated hitter Nicole Stockinger.

The Phoenix battled back and cut the Tigers lead to 5-3 on a solo home run from sophomore shortstop Hannah Olson in the top of the fourth inning.

A half inning later, sophomore shortstop Brook Miko hit a three-run home run and secured Towson an 8-3 victory in the series finale.

The Tigers split a doubleheader with the Phoenix falling in game one 3-2 but winning in game two 7-3 Saturday.

In game one of the doubleheader, Elon took a 1-0 lead in the fourth on a solo home run from Olson. 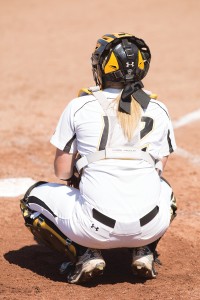 In the fifth the Tigers tied the game 1-1 on an RBI double to left field from Stracher but the Phoenix answered in the seventh with a two-RBI double.

Miko singled in the bottom of the seventh to pull within one of Elon, but Towson ultimately fell 3-2.

Dejter was tagged with her seventh loss of the season despite throwing a complete seven innings and allowing just three runs on five hits.

In game two of the doubleheader, Towson jumped out to an early 2-0 lead in the first inning thanks to a two-run home run from sophomore catcher Shelby Stracher.

“We just got back to playing our game,” junior first baseman Holiday Cahill said. “We played loosely and with a lot more intensity.”

The Tigers extended their lead in the third inning thanks to a sacrifice-fly from sophomore center fielder Kendyl Scott.

In the fifth, Elon battled back and cut Towson’s lead to 3-2 following an RBI single from Shutt and a fielder’s choice that allowed junior catcher Carey Million to score.

However, the Tigers had a big fifth inning of their own and scored four runs to take a 7-2 lead over the Phoenix.

Miko kicked off the inning with an RBI double to right field followed by a sacrifice-fly from senior right fielder Courtney Johnson and a two-RBI single from Scott.

Elon scored once more in the top of the seventh inning, but Towson came away with the 7-3 victory.

Hickman earned her 10 win of the season after pitching a complete seven innings and allowing only two earned runs on nine hits.

Towson will continue CAA play this weekend in Charleston, South Carolina, in a two-game series against the College of Charleston.