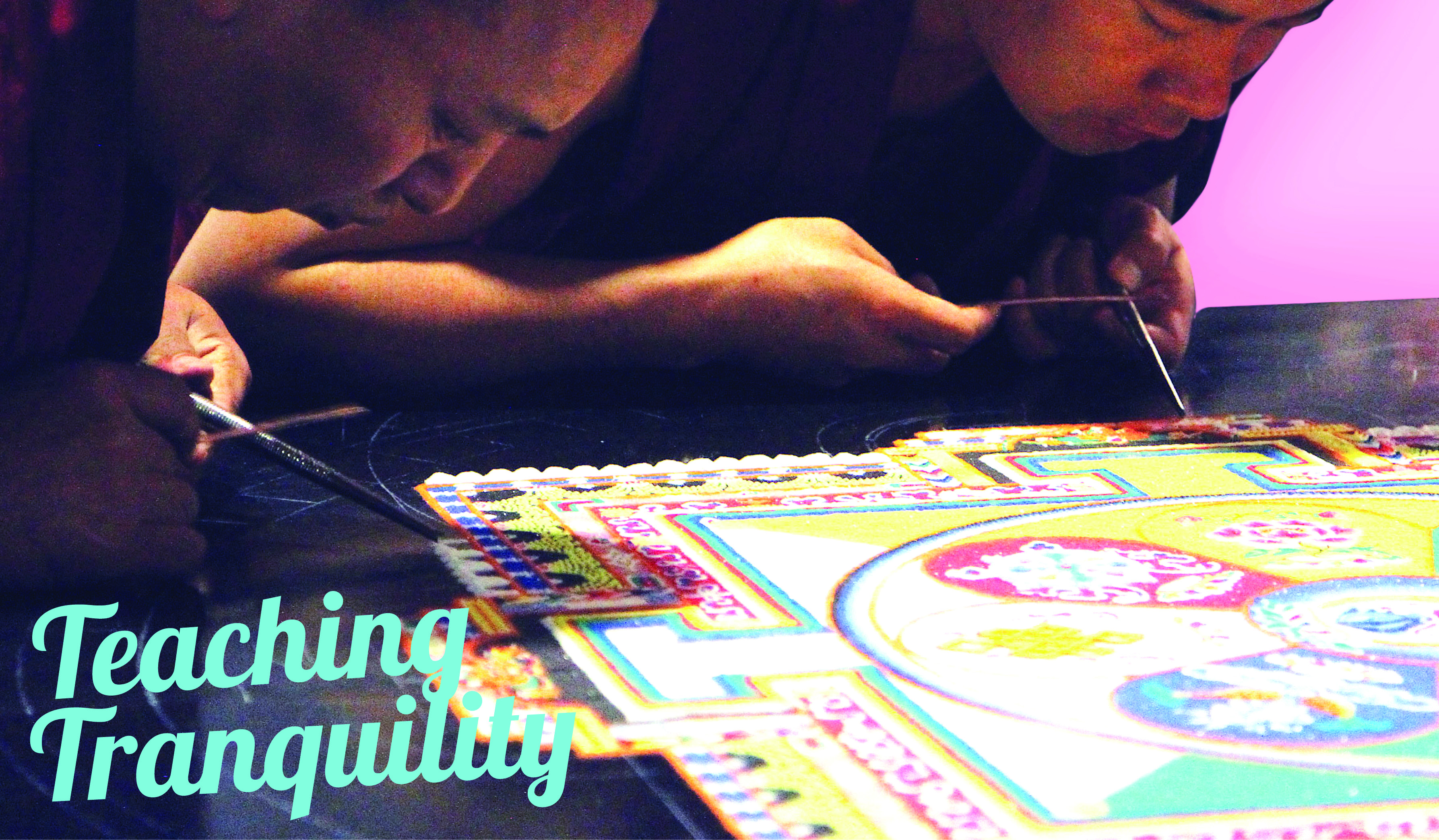 From Monday, Oct. 31 to Thursday, Nov. 3, a group of red-robed Tibetan monks hovered around a table in the center of the Union, meticulously scraping down grains of sand while chants bellowed from the speakers around them.

The monks used scrapers, or “chak-pur,” among other tools, to create a mandala: an artistic tradition in Tantric Buddhism that symbolizes the universe in perfect harmony and balance.

“We are traveling to different parts of the country mainly to present the Tibetan cultural tradition that we preserve [from] many years ago, to [let people] know the value of the tradition we have preserved,” Mystical Arts of Tibet spokesman Tanzing Phunchog said.

The artistic process began at noon on Monday with an opening ceremony that involved chanting, the blowing of horns and the blessing of the space in the Union where the monks, visiting from South India’s Drepung Loseling Monastery, would work for four days to create the mandala.

“It’s a ritual, a sacred calling of the Buddha and everything he embodies. If you invoke him, then that’s supposed to bring peace and conflict-resolution to the space and people in the space,” Asian Arts & Culture Center Director Joanna Pecore said.

The Mystical Arts of Tibet last came to Towson in 2010. Pecore decided that this semester was “the right time and place,” to bring them back, since the Asian Arts & Culture Center is currently displaying a Chinese Folk Pottery exhibit in the Center for the Arts’ Asian Arts Gallery.

The exhibit focuses on pottery from different minority groups in China, one of which is the Tibetan people of China’s Yunnan province.

“It’s the total, perfect fulfillment of our mission–to create cross-cultural dialogue,” Pecore said. “So even though they’re from Tibet, they’re addressing something that’s a universal need. And they address it in this way where it’s going to engage people in discussion.”

During the monks’ four days on campus, they hosted three lectures to teach students about the Tibetan Buddhist culture: Monday night’s “The Ancient Art of Healing,” Tuesday night’s “Tibet Today: the History of a Diaspora,” and Wednesday’s “Opening the Heart: Arousing the Mind of Universal Kindness.”

Religious studies minor Blaire Ferry attended the opening and closing ceremonies for the mandala and the “Art of Healing” lecture. She says she is really interested in the Tibetan Buddhist culture and shares many of its values.

“It was incredible. Such an amazing representation of how we can come together as a community to send healing and blessing into the world,” she said. “It was so incredible because it’s something that’s really needed…You have to look inward to find your own happiness.”

The lectures were presented in the Tibetan language by Musa Tulka, one of the monks, and translated by Phunchog.

During Wednesday night’s lecture, Tulka discussed how to open one’s heart to universal love and compassion. The key to loving others is loving oneself first, he said, but he cautioned the audience against allowing self-love to turn into egotism.

Tulka also expressed that in order to achieve true happiness, everyone must understand their own consciousness and recognize that while there are both light and dark aspects of human nature, we are all inherently good. Mental health, he said, is just as important as physical health.

“In ancient times, people didn’t have physical health, but they were mentally healthy,” Phunchog said, translating for Tulka. “With all the war in the past 200 years, it’s not like that anymore.”

Freshman Jordan Stewart, who attended all the seminars out of personal interest, felt she “could take something away from each one.”

“I liked the idea of trying to rid yourself of negative thoughts in order to achieve this universal mindset of kindness towards everyone,” Stewart said. “I think that I try to do that in my daily life, but it’s just good to hear some tips from people who have been studying this for years.”

Before leaving, Tulka remarked on Towson’s “beautiful” campus and expressed his hope that the school will offer courses in subjects like universal love and healing, as other universities have done.

“The Tibetan Buddhist philosophy is that you learn through experience. So actually having this demo here, and understanding that they’re putting all this work into the mandala, and knowing that at the end of the week it’ll be dismantled, we’re all experiencing it so we’re learning the basics of Buddhist philosophy that way,” Pecore said. “But to have a lecture is sort of another mode of learning. Some people like to actually sit and listen to someone talk.”

At the closing ceremony on Thursday, the monks dismantled the mandala by wiping the sand away. They gave bags of the sand to students, who were told to either keep the sand at home or drop it into a body of water that will lead into the ocean, which completes the healing process.

“Why we destroy this mandala, it’s important to know,” Phunchog said. “[It] represents all things in evenness, [and that there is] no more wronger in this world. [The world] keeps on changing, by minute by minute and second by second, as the impermanence.”

Next semester, the Asian Arts & Culture Center will host an exhibit and various events celebrating a theme of karaoke. They will also be offering three courses in the spring: Asia in Maryland Cultural History Project, Cambodian Classical Music Ensemble and Special Topics in Dance, Asian Traditions.

As Mystical Arts of Tibet continues to travel throughout the U.S., Mexico and Europe to share their art, Phunchog hopes that people will continue to be open to learning about the Tibetan culture and traditions, just as Towson students have been.

“The students, they’re showing great interest in the programs,” Phunchog said. “We expect and we hope to come back again.”

Taylor DeVille contributed to this story.