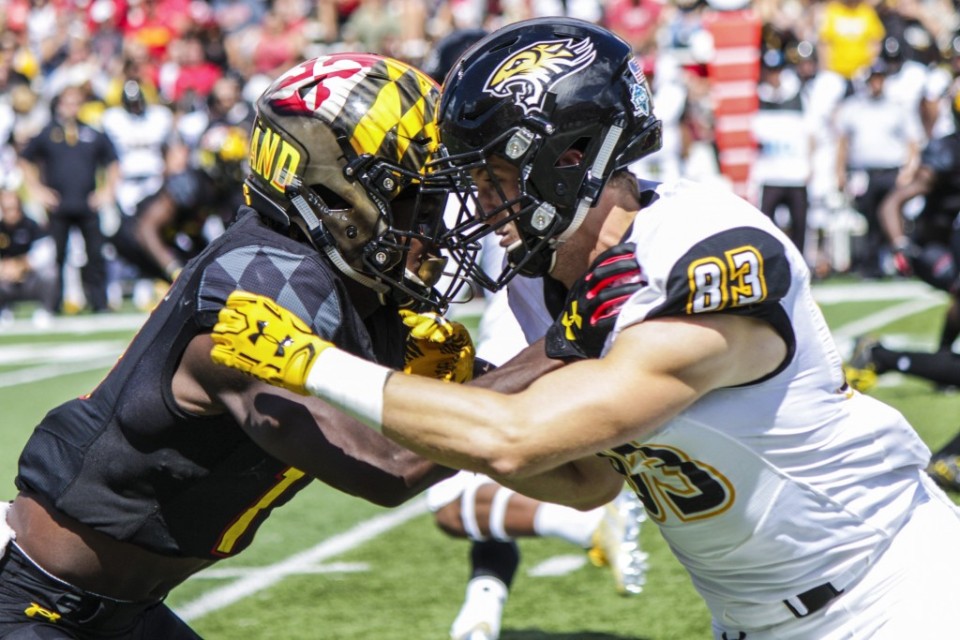 “In order to beat [Maryland] or any money-five school, we’re going to have to play damn near perfect, cannot turn the ball over and have to get a break here or there,” Head Coach Rob Ambrose said.

The Terps came into the game as the heavy favorites and looked to put the contest away early. Freshman quarterback Kasim Hill looked poised and confident in his first start, connecting with junior wide receiver D.J. Moore for scores on the first two drives.

Maryland put up three touchdowns in the first quarter, but Towson remained collected. Stover marched his team downfield on an impressive 11-play drive early in the second quarter. He capped off the drive with a touchdown pass to freshman wide receiver Jabari Allen.

Stover was given solid protection throughout the day and complimented the play of his offensive line following the game.

“We changed protections [because] we had a good feel for what they were going to do and we executed it well,” Stover said.

Stover completed a 59-yard touchdown strike to freshman wide receiver Rodney Dorsey in the fourth quarter for his second score on the day.

Despite the loss, Stover had a decent performance considering the level of talent that he was up against. He finished the game with a pair of passing touchdowns and showed nice scrambling ability, finishing with 52 yards on the ground.

“Try being a redshirt freshman going up against a team that’s probably going to be ranked in the top-25,” Ambrose said. “He did some really good stuff today.”

Though Towson’s offense executed well at times, the defense had a tough time making basic tackles. Maryland put on another impressive scoring outburst, led by a formidable ground attack. The Terps finished with 367 rushing yards overall.

Junior running back Ty Johnson accounted for 124 of those yards on just five rushes. His longest carry came on a 74-yard touchdown run at the end of the first quarter.

“We had a lot of missed tackles throughout the game and we just need to wrap up,” redshirt junior defensive back Monty Fenner said. “They were bigger, but when you have an opportunity to make the play then you just have to make the play.”

The Tigers finish non-conference play next week as they travel to face Saint Francis at DeGol Field on Sept. 16. Kickoff is slated for 7 p.m.

“I know how good they can be,” Ambrose said of his players. “When they go back and watch the film of them against the almighty Maryland Terrapins and watch how they performed individually or as a group, I think their confidence levels are going to go up.”