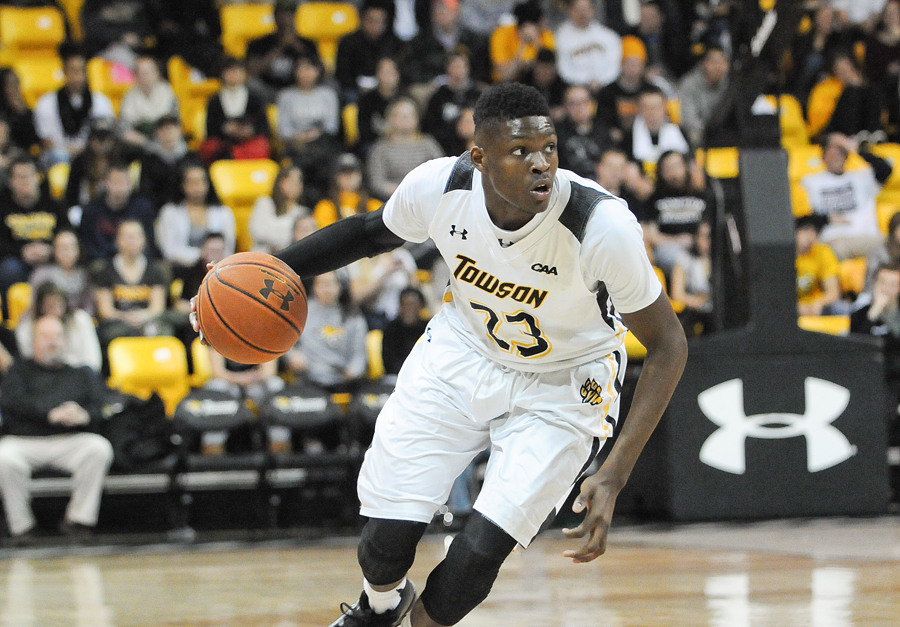 Although there are still nine games remaining in the season for the Tigers, Thursday night’s game against the College of Charleston Cougars was as close to a must-win game as Towson would get this season before the Colonial Athletic Association tournament.

The Tigers improved their chances of making the CAA tournament, though, by defeating Charleston, 74-70, giving them their third conference win of the season.

Although Towson is still tied for seventh in the conference with Elon after Thursday, Head Coach Pat Skerry said the conference is so even, he believes any team has a chance to win it.

“This league, someone’s going to win the thing that you just don’t know. It’s really balanced,” he said.

Charleston’s offense struggled early on in the game. The Cougars, who came in ranked 328th in the country in scoring offense, were held to just 19 points in the first half.

Five minutes into the game, sophomore forward John Davis, who is tied for 16th in the country in double-doubles with 10, made a free-throw and gave Towson a 4-3 lead. Then, the Cougars made two free-throws to take a 5-4 lead.

Davis and the Tigers wouldn’t look back, eventually pushing the lead to 15-9 after baskets from graduate forward Alex Gavrilovic and sophomore center Walter Foster.

The Tigers continued to dominate, and an 8-0 run was highlighted by a fastbreak layup for freshman forward Mike Morsell, making it 27-14 with just under five minutes left in the first.

Charleston would go on to score just five points in the final six minutes of the half, and Towson took a 33-19 lead into the locker room.

Sophomore guard Canyon Barry was 0-for-6 from the floor in the first half for the Cougars, while seven different players scored for Towson.

The Tigers did allow the Cougars to make the second half interesting. With 12 minutes left in the game, back-to-back turnovers from Towson allowed Charleston to cut the lead to 8, but a three-pointer from freshman guard Byron Hawkins pushed the lead back to 42-31.

Towson’s lead was eventually cut to just five with 9:40 left to play after back-to-back threes from the Cougars, but Foster answered at the other end of the floor with a layup.

Barry made up for his poor shooting in the first half by converting a four-point play, but the Tigers answered once again when Morsell drove to the basket and pushed the lead back to five with 8:45 remaining.

Charleston continued to chip away at the lead, eventually cutting the deficit to 51-49 with just under seven minutes left after sophomore forward Terrance O’Donohue was able to score on a put-back from his own missed shot.

Junior guard Four McGlynn, who came in as Towson’s leading scorer, gave the Tigers some breathing room again by sinking a 24-footer and then drawing a foul on the next possession, which drew a technical foul from Charleston Head Coach Earl Grant when he ran onto the floor arguing the call, throwing his jacket onto the floor and eventually retreating to the baseline after being coerced by his assistants.

McGlynn made all four of his free-throws, giving the Tigers a 59-51 lead, and helped them take control of the game with 1:51 remaining by driving to the basket and making a finger-roll layup over two Cougar defenders.

After the game, Skerry said the difference in the second half for his defense was that his team began fouling too often, and they weren’t as tough defending in the post.

“We took away the three all day, but I thought our post defense was lacking in the second half,” he said.

He almost gave that lead up, though, with less than a minute left. On an inbounds pass, McGlynn stepped out of bounds as he was running away from two Charleston defenders. That led to an eventual made free throw for the Cougars, but Morsell put the lead back to 67-62 with 42.3 seconds left by making two free throws of his own.

McGlynn iced the game by making two more free throws after an intentional foul and put the Tigers up by seven. Although Barry, who finished the game with 16 points, made a few late threes, Towson was able to hold on and make its free throws.

Freshmen Morsell, Eddie Keith II and Hawkins all played 19 or more minutes, and Morsell finished the game with 15 points.

After Towson’s recent road trip when Towson defeated Elon but lost to UNC-Wilmington by four points, Skerry said he made a conscious decision to start playing his younger players more.

“We didn’t get it done against Wilmington, but I thought the road trip revealed some things about personnel,” he said. “I think those three guys have a chance to be really good players for us. I’m excited about the group. We’re the 312th most experienced team in the country, so we have to learn on the fly, but it’s a good thing for us in the long run.”