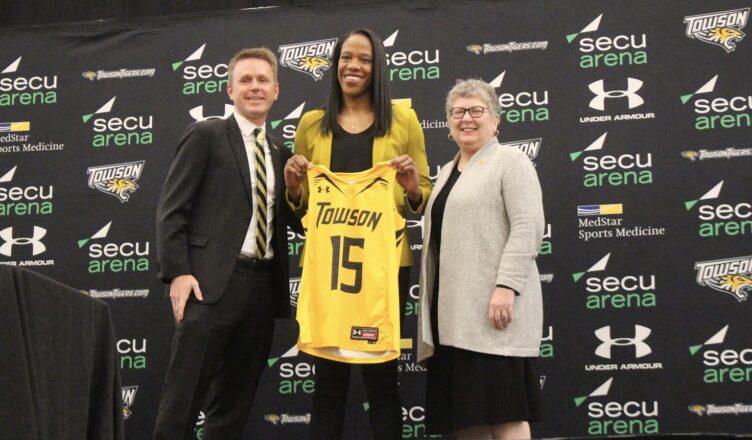 “We are thrilled and excited to start a new era of Towson women’s basketball,” said Steven Eigenbrot, Director of Athletics at Towson.

Eigenbrot said Towson hoped to find someone with high energy who is familiar with the Towson area and has coaching experience in the mid- and high-major levels of college women’s basketball. With Harper, Towson “found someone that has that, and then some.”

Harper is the 11th head coach of the Towson’s women’s basketball program. She will replace Diane Richardson, who recently accepted the head coach position at Temple University.

“I don’t think anything could have prepared me for accepting my dream job here at Towson,” said Harper. “It felt like home as soon as I stepped on campus. I felt like I was supposed to be here. I felt like I belonged here.”

Before accepting her new role at Towson, Harper was head coach at Coppin State University for two years where she was named Mid-Eastern Conference Coach of the Year for the 2021-2022 season, leading the Eagles to their first winning season since 2014.

Prior to her stint with the Eagles, Harper served as the head coach at Montverde Academy where she led her team to an 18 win season.

“I realize more than anything that my purpose is to coach and empower,” said Harper. “Towson is a championship-caliber program and anyone would be honored to lead what the student-athletes have in store.”

As a student, Harper played at the University of Maryland where she was coached by Brenda Frese.

Harper helped the Terrapins  win the 2006 National Championship after she was named Most Outstanding Player in the NCAA Final Four. Harper finished her collegiate career at Maryland with 1,407 points, 873 rebounds, and 198 blocks. Her No. 15 jersey now hangs up in the rafters at Xfinity Center.

Following her collegiate career in College Park, Harper went on to be the 10th overall pick in the 2008 WNBA draft. Harper played for the Sacramento Monarchs for two seasons before going overseas to play in Italy, Turkey, and Russia. Harper was also a member of the U18 and U21 national team where she led the United States to win gold medals in both 2004 and 2007.

“Winning takes work and I know I am here to work,” said Harper. “I’m eager and I want to be here. Everyone here is gonna get my best shot, every single day. That’s who I am.”

Harper commented on her relationship with the team’s former head coach, and how she looks to continue Richardson’s success with the program.

“Coach Rich coached me for one year at Maryland,” said Harper. “I am so grateful for what she did here for Towson Women’s Basketball. I would not be in this position today without her. I know that, hopefully, I will continue to make her proud with what is here.”

With the Tigers making the NCAA tournament in 2019, and coming off a 24-8 record this past season, Harper plans to live up to the hype and continue the Tiger’s success.