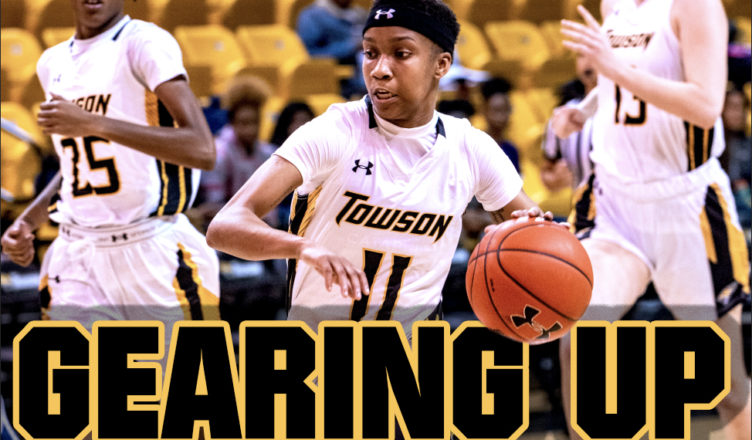 The transition is complete, she believes, with her playstyle implemented and culture established. That was all truly realized during the Tigers’ contest against Marshall last year when they were down 12 at the half but came back to win after a 9-2 run in the final minute. The monumental win was the launchpad for a six-game winning streak and the impetus to their postseason-run to the NCAA tournament.

“When you come into a new program, [the players] are used to things but I continued to preach that about culture and us being a sisterhood and all that,” Richardson said. “Last year at our Marshall game, it’s when it all clicked into them. They all bought in, that showed me that ‘okay they’re ready’ and we went on a six-game winning streak after that so we saw the result of that in our tournament wins so I think it worked well.”

Despite being the defending Colonial Athletic Association (CAA) champions, the Tigers are picked to finish third in the conference this season.

Even though the preseason ranking may be considered a slight by the Tigers themselves, it comes with some justification. Towson loses key contributors from last seasons through graduation such as guard Dani Durjan and center Maia Lee, or the tide of transfers like center Janeen Camp, guard Jalynn Holmes, and forward Aislinn Flynn.

While they have lost pieces in the offseason, they return some of their most important ones, the Tigers’ leading scorers are back in senior forward Nukiya Mayo and redshirt junior guard Kionna Jeter. Jeter averaged 17.3 points and 5.4 rebounds while Mayo averaged 14.3 points and 7.6 rebounds last season.

“We have a lot of great depth like [Coach Richardson] said,” Mayo said. “We don’t have to play as much, but we still have the same goal. We didn’t celebrate too much after the season was over because we knew we had to get right back to it.”

Amongst the returnees is sophomore guard Shavonne Smith, who received praise from both Mayo and Richardson during media day. After playing sparingly as a freshman, Smith went into the summer with the mindset to grow and get better every day, impressing teammates and coaches alike as her game grew.

“She didn’t see much action but she really really worked on her game this summer and I think we’re going to see her a lot on the court,” Richardson said.

Graduate guard Myka Johnson-Matthews transferred from Florida Atlantic and averaged 9.4 points per game last season. She is expected to contribute both on and off the court as a leader.

“A lot of the players are experienced,” Mayo said. “ I just think they add a lot of great experience and they’ll be ready to play.”

Towson plays an early daunting schedule against teams such as Penn State, Iowa, Temple, and Rutgers. The early-season tests should go a long way in helping the team grow when conference play starts against Elon University.

“I think with our four returners, adding Shavonne Smith and adding Myasia Jones, I think we’re going to see a lot of scoring this year,” Richardson said. “This year, with the pieces we brought in, we’re going to be not only fast, but we’re also going to have length and I think we have six true post players on our team this year which is going to help us inside.”

The Tigers won their opening exhibition vs Alderson Broaddus 75-43. Towson’s next game is against Penn State on Tuesday, Nov. 5. Tipoff from SECU Arena is scheduled for 4 p.m.

The Towson University men’s basketball team’s 2019-20 season begins with a home game for the first time since 2013. Towson will host George Washington in the home opener on Tuesday, Nov. 5.

Head coach Pat Skerry is elated to be back at the helm for his ninth season here at Towson. Last season, the Tigers struggled in conference play and lost six of their final seven games, including a 74-73 defeat to James Madison in the CAA Tournament. Towson’s record was 10-22 with a 6-12 mark in conference games.

A season like that can be humbling for players and Skerry saw that in his team’s work during the offseason.

“We have worked really hard and we are excited to get back on the floor to be ready for our games,” Skerry said. “I cannot say enough about this group’s work ethic for handling their business during the offseason.”

The Tigers will be an experienced team as 10 players return from last season, including four of five starters.

“For us to be really good, we are going to need depth,” Skerry said. “We had a couple of guys sitting out and we added a few freshmen and transfers that are good. So, nobody is entitled to anything and they all have to continue to work on their game so we can be successful.”

All-CAA Second-Team selection guard Brian Fobbs returns for his senior year after leading the Tigers in scoring averaging 17.5 points per game, fifth-best in the CAA.

Fobbs was named to the first team All-CAA Preseason team while Towson was picked to finish sixth in the conference.Redshirt senior forward Dennis Tunstall earned an All-CAA Defensive Team selection after leading Towson in rebounding (7.7) and third in the CAA in blocked shots per game (1.0).

“We lost a lot of close games last season, so we have pushed each other harder to make each other better while we all strive towards the same goal to win a championship,” Fobbs said. “The energy has been contagious with players coming in getting up extra shots and putting in work in the gym.”

The Tigers have their work cut out for them early on with games against the No. 4 Florida Gators and the No. 20 Xavier Musketeers already on the schedule. Towson will be competing in the Gildan Charleston Classic which features Xavier, as well as the Connecticut Huskies and Miami Hurricanes among others.

There will be plenty of chances to check out the Tigers as they will be playing in the DC Holiday Hoops Fest Tournament On Dec. 20-21 from the Entertainment and Sports Arena in Southeast Washington, D.C.. Towson will be competing with the Liberty Flames, Akron Zips and Tulane Green Wave.

The Tigers will return to the Entertainment and Sports Arena for the 2020 CAA Tournament, beginning on March 7. The last time the CAA Tournament was in DMV, Towson fell in the semifinals in 2015 at Royal Farms Arena in Baltimore.

November officially marks the transition from cross country to the indoor track and field season at Towson.

“The goal is to win,” head coach Mike Jackson said. “The teams that were in front of us are really strong teams that we respect, but you know we’ve been climbing the ladder for a while now and we expect to be at the top.”

Jackson prioritizes teamwork and wants to ensure his athletes buy into the program’s ideals.

“I think the first thing is togetherness, confidence and then attitude,” Jackson said. “If we’re together and that’s our foundation and then having confidence in ourselves and one another and then having a competitive attitude to believe that we’re the best and then going out to carry out that plan.”

Numerous sophomores who return after successful seasons last year make up the majority of the team and are expected to contribute, including Hayley Horvath and Crystal Johnson.

“Well the sophomore class is one of the strongest classes we’ve had in recent history,” Jackson said. “They’ve done an outstanding job. They’ve broken numerous records, but we’re focused on every single student-athlete. Each of them has a story and we’re trying to continue that story and make it one of success and I think that we have a legitimate chance to do something special this year.”

improvements from the field athletes give Jackson high expectations for his group.

“I’m expecting them to throw far, jump far and jump high,” Jackson said. “I’m very confident in them. The beautiful thing about the field event is that you have three opportunities and the other events you have one and so I’ll take my chances with that and [sophomore] Hayley Horvath had a great year last year. Went to NCAA first-round outdoors, but one indoor ECAC, broke the school record. [senior] Michella Obijiaku had an outstanding year in both the shot put and weight throw.”

Jackson also has high expectations for his track athletes.

“Leave their mark,” Jackon said. “[Sophomore] Crystal Johnson had a great indoor season. [Sophomore] Shamika Burton is much improved. She’s training extremely well. [Sophomore] Olivia Janke who’s been having a great cross country season is finally ready to go for the indoor season. We’ve got a lot of options. Some of our kids are improving tremendously. [Senior] Victoria Jones-Alleyne we think she’ll have a good year and so it’s just so many people to be excited about.”

The season begins for Towson with the Navy Lid Lifter on Saturday, Dec. 1 in Annapolis, one of three competitions to take place in the state capital.

The 2020 season will be one of new beginnings for past contributors for Towson’s gymnastics team. On Sept. 6, the school announced that Jay Ramirez (’03) would take over as the new head coach of the team. The alumnus has aided the team on several previous occasions working as an assistant coach from 2016-18 and in 2003 after beginning as a volunteer assistant coach for the Tigers in 1999.

The gymnasts have their work cut out for them after graduating five seniors last year, including Mary Elle Arduino, who received First-Team all EAGL honors on the beam last season. In addition to the new fresh faces in the coaching staff, the Tigers also bring a young team with them entering this season. Out of the 18 members of this years squad, 12 are underclassmen, including seven freshmen.

“I think we’re just excited to make a name for ourselves,” senior Olivia Lubarsky said. “This team has a ton of talent, a ton of potential. One of the things I love the most about this team is that we work hard, every single day.”

Lubarsky and her teammates are looking forward to this next chapter of Towson gymnastics. Those teammates include sophomore Emerson Hurst and senior Ally Wesoly, who both won multiple events last year and will look to improve on that this season.

“I think we’re just excited for a fresh start and kind of a new beginning and a new direction for the program in general,” Lubarsky said. “We’re working hard inside the gym, outside the gym to kind of bring Towson gymnastics to  the forefront of the Towson community and beyond.”

Lubarksy did not compete in a meet her first three years as a Tiger, but is looking forward to what this season has in store.

“I’m just honestly excited to be apart of such an amazing team,” Lubarksy said. “This group of girls is really something special, so it’ll be great to have them by my side.”

The Tigers will host Cornell, William & Mary and West Chester University on Jan. 17 for their first home meet of the season. Trips to North Carolina State, Penn State and West Virginia highlight a difficult road schedule for Towson.

The team’s first meet of the season is Sunday, Jan. 12 at 1 p.m. at the University of Pennsylvania. They will have an inner squad exhibition on Friday, Dec. 6 at 4 p.m. at SECU Arena.