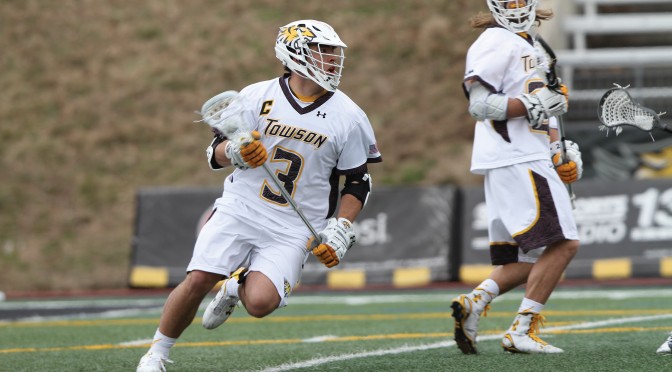 “I’m excited about the way our team came out of the locker room to start the game, especially facing off and offensively,” Head Coach Shawn Nadelen said. “We were really dialed into our shots and getting shots on the cage, really challenging their goalie.”

“We definitely had a bad taste in our mouth after that Saturday,” senior attackman Spencer Parks, who finished with three goals against the Stags, said. “All the guys on Sunday were talking and eager to get back to work on Monday. Over the course of the week, we had a tough week of practice, and I think we played today the way we should be playing and I think it showed on the field today.”

Towson trailed 2-1 early, but a 9-0 run put the team ahead 10-2 before the end of the first half. The run included four goals from junior midfielder Mike Lynch, who had five goals in the first half alone.

“I like to credit my teammates, honestly,” Lynch said. “People like Spencer and [Ryan] Drenner dodging and drawing two. I mean, I’m just sitting there ready to shoot and I try to get it on net.”

The Tigers kept a consistent lead in the third quarter until the Stags went on a 4-0 run and cut the lead to 15-10 in the fourth quarter. However, junior attackman Drenner scored with fewer than five minutes to stop the bleeding and help put the Stags away.

The game ended with redshirt senior goalie Tyler White lobbing a shot from his goal that ended up hitting nothing but net on Fairfield’s cage. The refs came together and counted the shot, which gave White his first career goal.

“The biggest thing for us is that it was Tyler and that’s why we were fighting for that goal,” Nadelen said. “It’s Tyler last home game, who’s meant so much to our program.”

The win allows Towson to control its own destiny for home-field advantage in the CAA Tournament if the team wins against the Hofstra Pride (9-4, 3-1 CAA).

A victory against the Pride will allow the Tigers to host the CAA Tournament May 5 and May 7 at Johnny Unitas Stadium.

Towson takes on Hofstra in its last regular season game Saturday at 1 p.m.

The Pride are led in scoring by junior attackman Josh Bryne who has 28 goals this season.

Hofstra is coming into the matchup with Towson having won three straight games.