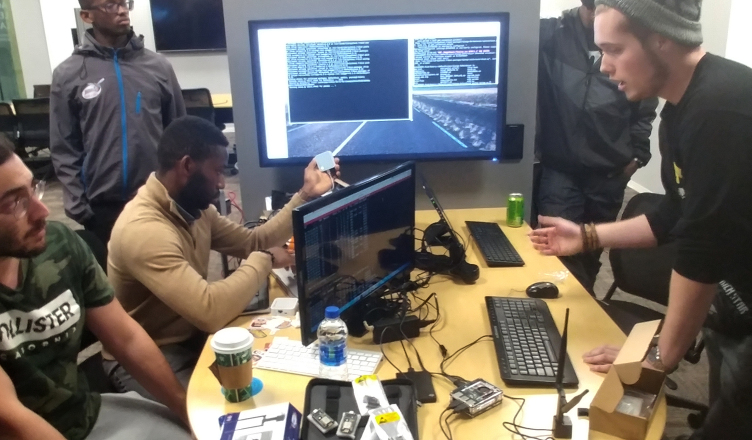 Photo by Marcus Whitman/ The Towerlight

Towson University’s Software Engineering Club hosted a Hackathon this past Saturday to give students the opportunity to learn, grow and share information and ideas about their projects.

Hackathons are invention based marathons where participants work in small teams to bring to life various computer programing projects.

“The first year was just a small event, which was just the computer science department,” Sheikh said.

Ramanchandran added that this year the Hackathon was open to the public and other universities.

One group in attendance was comprised of students majoring in computer science from Anne Arundel Community College. Ola Bamisaiye, Cyrus Razaviz, and Brett Ginski had participated in previous Hackathon events, including last year’s HackUMBC, when they used a combination of hardware and software to remotely drive a remote controlled car to check for vulnerabilities in access ports and networks.

“This year we are working on cyber security solutions for small businesses,” Razaviz said.

“We’re working on making a program that makes cyber security solutions that is simple to use, that tells [users what] their vulnerabilities are, and they can tell their web administrator or domain manager can fix these issues.”

According to Zaleppa, the group worked with Major League Hacking to set up the Hackathon.

“We signed up to be the event hosts for the event, and they sent us everything we need. They sent us the PowerPoints, videos, and swag,” Zaleppa said.

The Department of Computer and Information Sciences also helped set up and advertise the event, Sheikh added.

“We sent the emails out to all the professors in the Computer Science Department, as well as contacted other colleges in the area to let them know we were hosting the Hackathon,” Sheikh said.

One of the companies that sponsored Saturday’s event, Cyber4All, was in attendance working to recruit participants for openings in its company.

Representatives such as Software Architect Sean Donnelly, Senior Software Developer Nick Winner, and Site Reliability Engineer Nick Visallia, were looking for students with an attitude based on learning, and to find out what interested participants.

“We’re here to recruit students, we are going through a round of hiring right now,” Donnelly said. “We feel students that are showing up today are candidates we would be interested in hiring.”