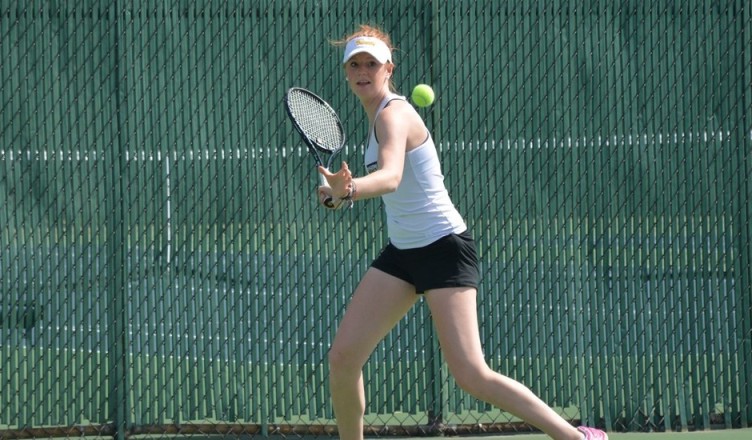 Following a crushing 7-0 defeat to Navy last Sunday, Towson rebounded with two impressive road wins this week by coming from behind to defeat Georgetown for the first time in school history Tuesday and hanging tough to beat Saint Joseph’s Saturday.

Saturday, the Tigers overcame some early struggles in singles to earn a hard-fought 6-1 victory over the Hawks at the Springton Tennis Club in Media, Pennsylvania.

Towson took an early lead in the dual match by winning two of the three doubles flights to win the opening doubles point. The No. 2 team of Lucy Williams and Jane Shusterman closed out Laura Gomez and Lourdes Sprinckmoller 7-5, while the No. 3 team of Lucy Gloninger and Barbora Vasilkova topped Maureen Devlin and Katherine Devlin 6-3. Saint Joseph’s Amanda Nava and Isis Gill-Reid defeated the No. 1 team of A.J. Gomer and Renate van Oorschodt 6-3.

“It could have been a really disappointing 3-4 loss, but they took care of business, which I have confidence in them to do,” Head Coach Jamie Peterson said.

Tuesday, Towson posted a historic 4-3 win over Georgetown at the Yates Field House in Washington, D.C.

The Hoyas swept all three doubles flights to seize the opening doubles point. Sara Swift and Sydney Goodson beat the No. 1 team of Gomer and van Oorschodt 6-3, Risa Nakagawa and Casey Marx edged past the No. 2 team of Williams and Shusterman 7-5, and Drew Spinosa and Cecilia Lynham defeated the No. 3 team of Gloninger and Martinez 6-2.

Georgetown added to its lead in singles, putting Towson in a 3-1 hole after three flights. The team’s singles wins came when Nakagawa beat No. 2 Gomer 6-4, 6-1 and Spinosa defeated No. 3 Vasilkova 6-2, 6-2. Towson’s only win by that point came courtesy of No. 4 Shusterman, who beat Goodson 6-2, 6-2.

The Tigers drew the match to 3-3 with two more singles wins, as No. 1 Williams outlasted Swift 7-5, 7-6 (4) and No. 6 Gloninger beat Marx 6-4, 6-3. The deciding match would be between No. 5 van Oorschodt and Daphne de Chatellus. With de Chatellus up 5-3 in the second set and in position to force a deciding third set, van Oorschodt came back to win 7-5, 7-5 and clinch the dual match for the Tigers.

“There was a lot of stuff that we were able to overcome, and in the end it paid off,” Peterson said. “It was a true team victory; everybody contributed a bit, and even the players who lost supported very well.”

The win over the Hoyas was a bit of revenge for the team, as the Tigers fell to them 4-3 last spring on a frigid evening outdoors at the Tiger Tennis Complex.

“I’m very proud of them for an awesome team effort,” Peterson said. “It was poetic justice for us.”